High School Floozical: “Easy A” is a Wonderfully Irreverent Look at High School and… The Scarlet Letter? 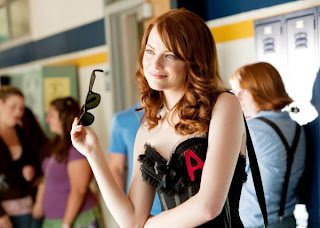 Teen movies can sometimes be amazing things. They appeal to high school kids mostly and are usually written off as just a piece of genre trash that only exist to make money. But the good ones, I’m talking about the really good ones tend to find a wider audience and even seep into the popular vernacular. I’m talking about movies like Clueless and Mean Girls and basically anything that John Hughes made back in the 1980s. Most people live by these movies and quote them nearly every day. It feels so wonderful to find a movie made today that feels just as fresh and original as anything that came out 20 years ago or 10 years ago or even five years ago. “Easy A” is a teen flick that I think most people will enjoy. It’s funny it’s witty and has a very appealing cast and will hopefully give the young and wonderfully talented actress Emma Stone the proper vehicle to drive on her road to superstardom.

I believe it takes several elements to have a successful “teen movie.” One you need an appealing lead. In most of these films the lead tends to be a young woman, ie Cher from “Clueless” or Cady from “Mean Girls,” or Chris Parker from “Adventures in Babystting”and even Viola from “She’s the Man.” They were all appealing. We wanted to follow them around for 2 hours. Here we have Olive (played wonderfully by Stone) who addresses the audience through her webcam. She says that she has a story to tell. And what a doozy it is. Teen movies need to also be sprinkled with wonderfully witty and quotable dialogue. Lines like “as if” and “so fetch” aren’t quoted all the time for no reason people. And lastly, you need warm and colorful characters for our heroine to interact with. These can be either fun-loving parents, siblings or BFFs. Easy A meets all of these requirements.

When Olive first addresses the audience so says she’s going to tell her side of a story. It seems as though a simply piece of gossip which was complete untrue spread around her high school like wildfire. She had told her best friend Rhiannon (Alyson Michalka) that she lost her virginity to a guy from a local community college. Virginity is the epitome of embarrassment for kids in high school and it’s equally something that can easily damage one’s reputation. Once olive realizes that everyone thinks she lost it to some guy during a one night stand she uses it to her advantage. One of her guy friends Brandon (Dan Byrd), who’s constantly being picked on because he’s gay, needs her help. He figures if he acts straight he wont be bullied. If he were to have sex with a girl, even just pretend sex, with someone everyone already thinks is a slut, it could prove that he’s just a cool hetero dude. Olive and Brandon enter a bedroom at wild party and pretend to do it but yelling and jumping on his bed. She even gives him her panties. Classy. What do you know, everyone likes him now.

Olive uses this slutty image to her advantage. Boys of all shapes and sizes begin seeking Olive to help them out with by pretending to lose their v-cards. What girl would want to pretend to be a slut? Olive of course who realizes her reputation is already down the tube, even though it may hurt her chances with Todd (Gossip Girl’s Penn Badgley) the guy she likes. Heck she might as well pretend to sleep with these losers and get some giftcards out of it. She even pins a red letter A to her dress at school, because ironically, like the best high school flicks, her assigned reading in English class is “The Scarlet Letter.” Olive even wittily tells us that if we were to be assigned the book in school it would be wise to watch the original film version and not the one with Demi Moore. Luckily, Olive has miracle, only-in-the-movies parents played terrifically by Stanley Tucci and Patricia Clarkson. And thank goodness for Amanda Bynes who is wonderful as a leader of a religious clique who protests Olive’s adulterous ways.

The film is directed by Will Gluck who co-created the wonderful and underrated Fox sitcom “The Loop” which lasted pretty much 3.5 minutes. And even more shocking is that this is screenwriter Bert V. Royal’s first script. It is great and has some pretty droll observations about life in high school and how much gossip really influences the choices teens are forced to make at such a young age. The script works as a coy look at teenagers and it also works as wonderful tribute to all types of teen flicks most notably the ones by John Hughes.

Easy A is a wonderful teen comedy. I’m 27 and I certainly enjoyed it, so I think that anyone who is fan of irreverent humor and a different take on high school life will find something to like. Stone has never been more wonderful and I can’t wait to see what she has lined up next. GRADE: A-

Great article, exactly what I was looking for.