Shipping Up to Boston: “The Town” is a Superbly Executed Heist Flick 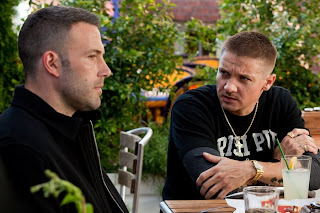 A movie like “The Town” is the hardest type of movie to write a review of. It’s a great movie. You want to praise it, but not over do it. It’s a serious movie so it’s hard to crack jokes about a movie that takes itself so seriously. And it stars and is directed by Ben Affleck, he’s usually the butt of jokes but not here. As a director he’s a force to be reckoned with because as of now his stance is 2 for 2. A few years back he gave us the brilliant “Gone Baby Gone” and directed Amy Ryan’s powerful performance to an Academy Award nomination. Just how is it that this guy, who stared in flops like Gigli and Reindeer Games, on a winning streak in Hollywood. Once just tabloid fodder he is now an auteur who can take simple, emotional character based stories and turn them into fascinating, addictive films. How can you joke about that? Affleck I salute you!

“The Town,” taking place in Charlestown, Massachusetts, tells the story of a man named Doug MacRay (Affleck) and his three friends who are a team of bank robbers. They’re pretty stealth and rarely come into much trouble. They have a sophisticated system that helps them avoid capture from the authorities. The film opens up when them robbing a bank wearing scary monster masks. They take a woman hostage but eventually let her go. This woman is Claire Keesey (Rebecca Hall). Claire is obviously shaken up by the robbery and fails to tell the FBI specific things about her captures (including a tattoo seen on the back of Jem’s (Jeremey Renner) neck. Doug begins to follow Claire around to make sure she hasn’t said anything to the feds that could put his team away. In so doing they begin a romantic relationship.

One could easily slap their forehead and claim that Claire is the stupidest character they’ve ever seen. She has no clue that Doug is one of the men who took her hostage and it’s simply fascinating to watch their relationship develop. And it never seems forced, it blossoms naturally. We can credit Affleck and the other two screenwriters Peter Craig and Aaron Stockard (who co-wrote Gone Baby Gone). They write realistic characters who are put into such a strange situation and it makes the viewer just sit there waiting to see what’s going to happen next (The film is based on a novel called “Pince of Thieves.”) Meanwhile FBI agent Adam Fawley (Jon Hamm) suspects Doug and his friends but needs more evidence. He almost gets more evidence during a breathtaking bank heist that almost goes wrong in which the team is dressed in disturbing nun masks. You’ve seen the posters and ads, it’s a very stark image and it stays with you. Doug, who actually works for a local Irish “florist” played by Pete Postweaite is sort of forced to go on a another robbery even though Doug wants out and to be with Claire. This time he’s forced to rob the Heart of Boston itself…. Fenway Park. Oh and Blake Lively from “Gossip Girl” skanks it up nicely as a white trash mom.

I can’t even begin to describe how well these heist scenes are shot and put together. The action is incredible and I don’t even recall blinking because I didn’t want to miss a millisecond of it. The gritty photography from Robert Elswit makes the film drip with a glorious 1970s vibe that I really dug. This is sort of “The French Connection” for today’s generation.

While I don’t think it’s better than something like say, “The Departed,” I think it can easily stand beside it as yet another wonderful Boston-set modern crime film that is exquisitely acted and directed. It’s such a well-made film you sometimes wonder why Ben Affleck spent so much time in front of the camera (although his performance is good here) when all along he should have been in that damn director’s chair from the beginning! GRADE: A