Site Club: I Want to Friend “The Social Network” But I’m Still Awaiting a Reply 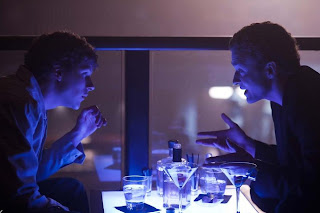 As a college graduate myself, and someone who spends more time on Facebook than I probably should, why do I find it nearly impossible to relate to the college-set movie “The Social Network?” Is it because I didn’t go to an Ivy League school and I’m not a genius? Is it because I relied too much on my parents while in school and no intentions of starting my own business while still being too young to even purchase alcohol? Did I just not understand the rapid fire dialogue writer Aaron Sorkin laid out in his Citizen Kane-aspiring script about a seemingly autistic real life college student who sort of unknowingly creates one of the most popular websites on the entire planet? And all from the comfort of his Harvard dormitory. “The Social Network” feels like a movie that doesn’t need to exist and yet here it is the so-called “Facebook movie” about the creation of the popular social networking website that at this point society almost depends on. Maybe it’s supposed to be a slap in the face to all of us to stop spending so much time on the computer and instead interact with our friends in real life rather than in the virtual world of “poking” and “friending” and “status updates.” I for one am guilty as charged.

David Fincher is an awesome director. Take a look at anyone one of his films, from the gritty style of his cult hit “Fight Club” to the creepiness of “Seven” and the technically wizardry of “The Curious Case of Benjamin Button” Fincher has provided plenty of wonderful cinematic stories that showcase first rate directorial craftsmanship. He knows how to tell a story visually and is always prepared to show you a world you haven’t quite seen before. Which is why I have to classify “The Social Network” overall as a mild disappointment. It has a lot of great things going for it. It has great performances and an interesting visual look and a clever story structure. But as a movie about college students I didn’t find myself relating to any characters and I felt like an outsider looking in. The college life in this film doesn’t seem real to me. Everything is lit so darkly, that it feels like Mark Zuckerberg (Jesse Eisenberg) and his poor roommates are living in a dungeon. And who the heck becomes part of a lawsuit and never makes one phone call to their mom and dad for advice? Who becomes an accidental billionaire without bragging to their relatives about it? And if I got arrested for cocaine possession, I wouldn’t be calling the creator of Facebook from jail.

Supposedly how Facebook was created started when Zuckerberg broke up with his girlfriend. He ran back to his dorm room and blogged about what a bitch she is. Then he created a “hot or not” type of website where Harvard students could choose between two student photos and pick which girl was hotter. That spawned an idea that a website should be made with the intentions of connecting all Harvard students. Each person could create a profile and post information about themselves all the while being able to stalk those who probably don’t want to be stalked. Zuckerberg and his friend Eduardo Saverin (Andrew Garfield) started developing the idea after these two twin brothers the Winklevosses (played with a little help of seamless movie magic by one Armie Hammer and stand-in Josh Pence) who say Zuckerberg stole their idea after he had agreed to work with them to build a similar site. Soon Napster co-founder Sean Parker (Justin Timberlake) gets involved and begins coaching Zuckerberg until the idea of dollar signs begin corrupting all these brilliant young minds. I really enjoyed Timberlake’s performance and I really feel the film came alive when he was on screen.

I guess I’m not too surprised by anything that happens in “The Social Network” because it’s a similar story of a young brilliant mind looking for greater power. It just so happens to be a story about the creation of Facebook, which to this day has about 500 million users around the world. Facebook, as ridiculous as it sounds, is a major deal in the world because it’s so popular, but I’m still not convinced that that movie really needs to exist. Of course you could argue the same thing about, say, “Piranha 3D” but at least that movie doesn’t take itself too seriously.

Look there are plenty of things to love about “The Social Network.” It’s a well-made film . It’s slick and entertaining. Maybe it just caught me on a bad day. I enjoyed many of Fincher’s choices and his use of Trent Reznor and Atticus Ross’ music is a wonderful choice that fits the film’s gloomy tone. Like one of Fincher’s other recent films “Zodiac,” it may take me a while to warm up to the film, but no one can deny that David Fincher, like many out there in Hollywood, is certainly a force to be reckoned with. GRADE: B-

That is why no one can feel enormous smiles without replica watches at all. They are the attractive watches recently. For instance, replica Omega watch is the most adoring fake rolex sale for those types of females who would want to show you as very trendy and glamorous women. Replica Omega is a very stirring type of watch. It retains very full-bodied and trusty logos. It contains very sturdy shapes. Significantly replica watches sale is a very lucrative watch. That is why we cannot have any kind of problems while buying rolex replica sale at all. They are very classy watches. They cannot only modify your modern day fashions quite stunningly but also trim down your nervous tension incredibly. Overall replica watches sale is a stimulating watch. That is why online rolex replica sale offers you well-matched, steadfast and lucrative Omega replica watches designs worldwide in a professional manner.