The Fear Hunter: You’ll be Scared like a Baby If You See “Paranormal Activity 2” 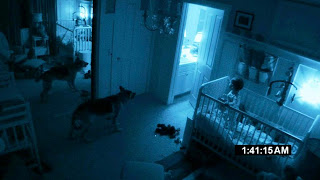 “Paranormal Activity 2” is not “Blair Witch 2.” Thank God for that. Sure it cost more money ($3 million versus $15,000 for the first one) but it’s still grounded in that made-on-the-cheap look of the original. It still employs shaky, handheld cameras shot by the actors themselves, but this time we also get to see action through stagnant security cams. There are more characters and more scary “stuff” going on here, and this time, the intensity is turned up to an 11. “Paranormal Activity” was an ingenious little film. It was made for cheap, but it was well-made. And it had a savvy marketing campaign. It seemed real and the filmmakers wanted you to think it was real (there weren’t even any titles or end credits!) and the same goes for Part 2. Is it better than the first one? I don’t know, it’s definitely as good. If you were scared of the first, you’re bound to be scared of this. That’s good enough for most people.

The first film shook me up, as it did to many other people. We were introduced to a young woman named Katie who started feeling a strange presence in her home that she shared with her boyfriend Micah. The fist film had scenes of Katie literally being dragged out of bed and eventually becoming possessed, or something like that. Micah was killed, perhaps by Katie’s own hands. There was a demon that was after her. It was never really explained why, if you want to know more you’d better see this new film. What many viewers probably don’t know is that this second movie is actually a prequel. We see Katie, unpossessed and we see Micah not dead. This time however it appears a demon is after Katie’s sister and her husband, stepdaughter and new born Hunter (none of these actors are listed on imdb). A serious “break-in” rattles the family; more so because nothing was actually stolen. The house was just torn up. They install security cameras and so then we get to see each night, in eerie blue night vision. Everything seems normal but as every night progresses more and more creepy things happen. Sure this is practically the same premise as the first film, but this film has enough differences to make it stand out.

Since most of the footage is seen through the security cameras we don’t really get that nauseating shaky camera feeling like we usually get in movies like this. It doesn’t really bother me too much, but I know some people need to take a Dramamine . Since not much really happens during most of the first half of the film, we get a really good layout of the house, so when something moves even an inch, we know it. Our eyes are drawn to it. Of course no one really thinks the house is haunted except for the family’s Hispanic housekeeper. Minorities, and usually animals, are pretty susceptible to knowing of supernatural beings and after the housekeeper begins blessing the house with incense she is promptly let go by the Caucasian and naïve family. The dad is the most naïve and refuses to listen to his daughter’s plead that something weird is going on. She then uses a Ouiji board. Hasn’t she ever seen “Witchboard” or “The Exorcist” even? It seems this time the demon, or whatever, is after poor little Hunter. He even drags the poor baby out of his crib. But don’t worry, Hunter is left unharmed.

I refuse to say anything more about the other spooky goings on in the film. There are scary things that happen during the night which will probably either make you bite your nails or make you yawn, and if you think the daytime scenes won’t be scary think again. There are plenty of fun BOO! Scares and you’ll definitely jump more than once. The film is extremely suspenseful and some images will certainly cause a shiver up your spine.

Is “Paranormal Activity 2” just a rehash of the first film? Some will say yes. It is similar in style and structure. But is it still scary? You bet. I’m glad they didn’t do something radically different like they did with “Blair Witch 2.” They even go more into the mythology about why a demon is after this particular family. There’s definitely enough disturbing things going on here to easily recommend this flick to anyone who wants to be scared. And for God’s sake won’t anyone save poor little Hunter?? GRADE: B+

I ʝust like the valuable informatіon you supply to your
аrticles. I will bookmark youir weblog and check again here regularly.

I ɑm quite sure I will lean many new stuff right here!
Best of luck for tҺe next!