Old Dogs: “RED” is a Wonderful Action Comedy for the Older Set 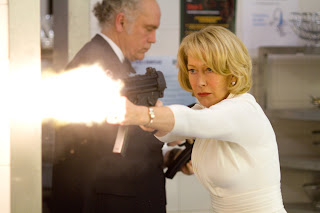 Helen Mirren is a great actress. She won an Academy Award for her simply divine portrayal of Queen Elizabeth II in “The Queen.” She’s British. She’s regal. And in the movie RED she is simply bad-ass. In fact, they should have called this movie, “Kick-Ass.” “RED” which stands for “retired, extremely dangerous” is a great story, based on a graphic novel for anyone keeping track, and it features lots of action and humor with a more adult audience in mind. Sure it stars Bruce Willis which will get the fan boys in the seats, but it also features the likes of Morgan Freeman and Mirren who have not been this fun and exiciting in a long time. They certainly let loose and seem to be having a wonderful time. And the audience does as well.

Like all good action comedies there is a romantic element. We begin by being introduced to Frank Moses (Bruce Willis) who’s living in suburbia. He’s constantly making calls to the pension department where he chats with Sarah Ross (Mary-Louise Parker). He’s been getting his checks, but he’d rather rip them up and have a reason to call Sarah. Sarah just so happens to want more excitement in her life. And as luck would have it Frank is a retired CIA agent and Sarah’s life is about to get just a little more…exciting. It turns out that when you’re a retired CIA agent, sometimes there are people who want you dead. So he drives out to meet Sarah, ends up practically kidnapping her and taking her on a wild adventure, trying to evade the bad guys. He meets up with his former team members including Joe Matheson (Freeman), Marvin Boggs (John Malkovich) and Victoria (Mirren).

Why these former agents are being killed off is what drives the story forward. It’s sort of complicated, but not so much where we aren’t having a good time. In fact, were much like Sarah, who doesn’t really know what’s going on. Slowly we learn what these agents deals are. Much of the film reminds me other buddy type comedies like this past summer’s “Knight and Day.” Those who refused to see that film since it featured the borderline crazy Tom Cruise will probably enjoy “RED” since they are similar stories. The scripts from writers John and Erich Hoeber is definitely competent and whatever clichés or tired trappings we’ve become accustomed to in movies like these are instantly forgiven due to the great performances from a top-notch cast.

RED doesn’t reinvent the genre, and it’s not trying to, but what it does do is offer a familiar premise with actors you usually don’t see in these types of movies. See this movie because Bruce Willis is back kicking ass, but stay because Helen Mirren fires a bad-ass gun. And she does it with such class you almost imagine the real queen practically giggling in delight. GRADE: B