Invitation to Hell: Wes Craven’s “My Soul to Take” is a Nightmare of the Worst Kind 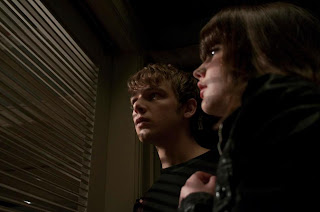 Oh dear lord. Where do I even begin? Bad Wes Craven! Bad bad bad Wes Craven! I’m almost offended by the fact that the man who has directed some of my favorite movies (ie, A Nightmare on Elm Street, Wes Craven’s New Nightmare and the Scream series) has made the complete mess of a film called “My Soul to Take.” About half way through I begged someone to take my soul as long as it meant I didn’t have to keep watching. I know it’s my own fault, I didn’t listen to the naysayers. I had to see this train wreck for myself. It was 107 minutes of pure rubbernecking. A movie like “My Soul to Take” shouldn’t require the amount of concentration that it takes to watch something like “Inception” or “Mulholland Drive.” At least those movies actually make sense once you piece everything together. “My Soul to Take” makes no sense whatsoever and will make you leave the theater with a sidesplitting headache. It could be all forgiven if the thing was at least semi-scary or even remotely suspenseful, which it’s not.

I honestly believe “My Soul to Take” is a horrendous movie because Wes Craven is a good filmmaker. Let me explain. I had read that Craven was tired of the recent “torture porn” horror trend and sick of all these retreads and sequels and remakes and reboots. I honestly respect him for attempting to do something original. And it was great to see him back in the writer and director’s chair since he hasn’t fulfilled both duties since “New Nightmare” (If anyone is keeping track, he did co-write the horrible movie “Pulse” and the borderline horrible “The Hills Have Eyes 2”). And instead of just making a simple movie that anyone could follow, he attempted to make a complex story with an attempt at social commentary. It didn’t work. His complicated storyline, which involves a serial killer possible coming back from the dead, is too convoluted to make much sense and any attempt at suspense is wasted because the audience is trying to think so hard there’s not time to be scared.

The story revolves around the town of Riverton. We’re supposed to assume this takes place somewhere in New England (it was filmed entirely on location in Connecticut). The Riverton Ripper is a killer who murdered seven people. He’s a father and family man, but he has several other personalities, one of which is the killer. It’s explained to us by a conveniently placed Haitian paramedic that this man in fact has multiple souls, not just personalities, which I guess means if he dies he’s still got like six more souls to use to keep on living. I think? Anyway, he’s taken away in an ambulance and it crashes and we’re supposed to assume he dies or the body gets lost in the river or something. The film skips ahead sixteen years where we learn that seven children were born the night the Ripper died. The kids known as the Rirverton Seven hold a special séance to help prevent the Ripper from showing himself again. Meanwhile, the Ripper does in fact return to kill off the kids born that night, but it’s possible he may not be back at all and it’s one of the teenagers who’s soul is possessed by the Ripper. Yawn.

Wes Craven attempts to create a “Nightmare on Elm Street” type of back story and it really just backfires. There’s way too much happening, and none of it interesting enough, for anyone to care about what’s going on. Freddy Krueger’s story was so fascinating and it’s not a coincidence that he became a pop culture phenomenon. The Riverton Ripper is definitely destined to do the same thing. Craven’s attempt at creating interesting teenage characters also fails miserably. He introduces us to Bug (a decent Max Thieirot) a good kid who’s shy and might have a seriously close connection to the killer. His classmates are all annoying and/or not appealing. His friend Alex is just obnoxious and has to deal with his abusive stepfather (and the two of them are obsessed with the California Condor for some reason). There’s a jock who picks on these two, a pretty popular girl who is the object of Bug’s affection, a religious girl, and a blind boy who I never realized was blind until he whipped out a white cane half way through the movie.

Ugh I can’t believe how frustratingly bad “My Soul to Take” is. It’s a pretty ugly looking movie that feels cheap. Craven’s films, at least the recent ones anyways, have a nice sheen to theme, this one just looks ugly. It feels poorly slapped together. There aren’t even any memorable death scenes! Wes, what is wrong with you! You created Freddy Krueger for God’s sake! Luckily I avoided seeing the film in 3D which I heard is atrocious and pointless. It’s really a shame, because even some of Craven’s lesser known movies like “The People Under the Stairs “or “The Serpent and the Rainbow” can be entertaining even if they’re a little silly. And heck, I’m even a fan of Horace Pinker. I still love Wes Craven, but I’m hoping that his upcoming “Scream 4” will erase all bad memories of this truly dreadful flick. GRADE: D-


Note: I know someone who worked as an extra in the film. He's in the background in one scene and he's a very good extra. The only thing saving this thing from getting an F.
Posted by Chris at 3:39 PM

Spot on with this write-up, I really feel this site needs much
more attention. I'll probably be back again to
see more, thanks for the info!

Thank you for the good information and very helpful. That's very interesting. I like all the things you share and see your beautiful creations, greetings from Admin scan dokumen I hope you can visit and comment on my website :)