The Lady is a Vamp: You’d Be Wise to Let “Let Me In” Into Your Life 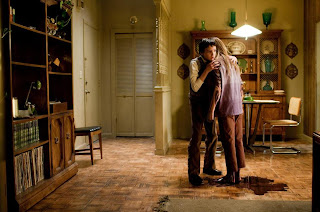 “Let Me In” if you want to compare it to it’s Swedish counterpart, is every bit as good as “Let the Right One In.” It maintains the same feel without ever feeling like a rip-off. Maybe this movie doesn’t have a reason to exist except that even if it makes people want to see out the original film, it’s at least accomplished something. It’s basically just another version of the book on which it’s based (“Låt den rätte komma in”) and how many times have there been multiple versions of novels brought to the screen? Too many to count. This is just one and it’s a particularly harmless and extremely entertaining take on the recent vampire craze.

“Let Me In,” like the original film, is the anti-“Twilight.” It’s a film that takes itself seriously in a way that is impossible to make fun of. It treats the vampire mythology seriously and is much more akin to films like “Interview with the Vampire” than the recent slate of Stephanie Myers’ wildly popular pop cultural phenomenon. It’s a different take on the “teenager as vampire” in which a young girl, who’s actually most likely hundreds of years old, who must forever blend into a society as a human being even though she is a vampire. Her name is Abby and she’s played marvelously by Chloe Grace Moretz. She moves to a cold, snowy town in New Mexico and befriends a lonely boy named Owen (an equally good Kodi Smith-Mcphee). See this movie because it has vampires in it, but stay because of these terrific young performances.

Owen is a sad little boy. He lives with his mom because his parents are divorced. And director really gets into how detached he is from his mother because we never really get to see her face. He shots these scenes at home from a low level and gets right in there, similar to “Where the Wild Things Are.” Both films are from a child’s point-of-view. Owen is constantly bullied at school and sometimes its pretty disturbing. The film at first makes the bullies seem just like the “bad guys” who we want to see punished until we realize that, like in real life, most bullies only bully others because they themselves are bullied. And once a horrible act is committed against them, it’s not a feeling of retribution or justification we feel, but of sadness and hopelessness. It’s a well-done scene that equally rivals the original film’s stark and powerful images.

Abby, as a vampire, must drink human blood to live. She leaves this up to a man who’s known as her “Father” to go out find her human blood to drink. Father, played here by Richard Jenkins, has probably the most disturbing and horrible tasks to accomplish in the movie. He must go out and commit murders so his “daughter” can survive. These scenes have an eerily spooky feeling, and one shot in particular is jaw dropping and will make you wonder how it’s accomplished. You can tell from this shot alone that that man behind “Cloverfield” (director Matt Reeves) was responsible. Reeves gives us some pretty daring and interesting shots throughout the film, although I think the overall look of the original film looked more “pretty.”

“Let Me In” is that rare film that is as good, if not better than the original source material. It refuses to “Hollywoodize” the story of “Let the Right One In” (unless you wanna count a few instances of cheesey CGI) and instead makes its own unique mark on the film world. If anything, like all remakes, it’s fun just comparing the two and figuring out why certain changes were made and how two different visions could be accomplished from the same source. It’s all pretty fascinating stuff. GRADE: A-