Leap of Faith: The Mockumentary “The Last Exorcism” Offers Subtle and Eerie Chills 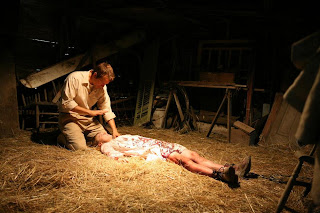 “The Last Exorcism” could have been called The Rosemary Exorcist Project.” That’s not an insult or anything, just a mere observation. It’s obvious that the film has been influenced by other scary films. I spotted influences from everywhere from “Rosemary’s Baby” to “The Blair Witch Project” and to me it has an overall eerie feeling much like the original “Texas Chain Saw Massacre.” Sure some would say it just copies those films, but I think “Exorcism” can stand alone. I find it fascinating that movies with documentary looks, “mockumentaries” if you will, are so popular these days. Heck sometimes they’re even nominated for Best Picture (i.e. “District 9”)! While I’m not too worried about the state of the dolly grip in today’s film industry, I will say that it seems like the shakier the camera the more audiences are eating this stuff up. I don’t think it was a coincidence that both “The Blair Witch Project” and “Paranormal Activity” are two of the highest grossing low budget movies of all time.

Ok so “The Last Exorcism” isn’t as good as any of the above films I’ve mentioned but it still has its moments. Set in Baton Rouge, Louisiana, the film starts off sort of lighthearted by introducing us to our hero Reverend Cotton Marcus (Saved by the Bell The College Years’ Professor Lasky himself Patrick Fabian). He’s a disillusioned man of faith who performs “exorcisms” on people claiming to be possessed. But like you and me, he doesn’t believe any of it. He invites a documentary crew to document what he says will be his last exorcism. He wants to expose his ministry for the frauds they are. He picks up a random letter sent to him and perhaps gets more than he bargained for. And that is of course when the film begins to get super creepy. Marcus goes to see the Sweetzer family who lives in a dilapidated farm house in the middle of nowhere. Leatherface might as well be their neighbor. It seems the young teenage daughter Nell (Ashley Bell) blacks out during the night and slaughters animals on the farm. Her father Louis (Louis Herthum) believes his daughter is possessed. It doesn’t help that Nell’s brother Caleb (Caleb Landry Jones) is almost as strange as anything that Nell does while being possessed. With a few simple parlor tricks, Marcus tricks the family into thinking he has exorcised the demon from within Nell. And then the sh*t really hits the fan.

The film is directed by Daniel Stamm and from what I can tell this is the first film about exorcism that has been filmed in this documentary style. I think the film benefits from this for a couple reasons. The pov camera is great for scary movies because you never know what’s hiding just out of frame. There are several scenes that are 100% more suspenseful because of the camerawork. I enjoyed how the characters actually interact with the film crew which includes the cameraman Dan (Adam Grimes) and the director and producer Iris (Iris Bahr). Dan and Iris, thinking they’re making a film about the fraudulent nature of exorcism have no idea what they’re getting into and that really works here. The film, by starting out sort of lighthearted, takes its time building suspense and focuses on mood. Nothing we see is completely and utterly horrifying but it’s creepy and quietly disturbing. I imagine many will find the film truly terrifying while some will find it merely atmospheric. Perhaps even more will be disappointed with the film’s abrupt end. For everyone person who loved how “The Blair Witch Project” ended (like me) there were ten times as many people who simply hated it.

“The Last Exorcism” is a great example of how much reality television has really influenced cinema in the past several years. I can’t imagine a movie like this playing in multiplexes before the days of “The Blair Witch Project.” This film borrows heavily from other better films, but if offers good and realist performances and has an interesting take on the nature of religion in our society. It offers some creepy and disturbing scenes and will certainly get people talking once the film has ended. GRADE: B