Drag Me to Hell: Lucifer Takes an Elevator Ride in “Devil” 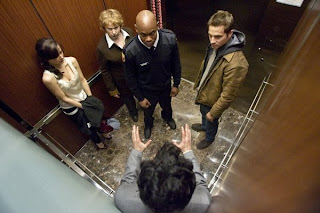 Poor M. Night Shyamalan. It started so high, there was nowhere else to go but down. “The Sixth Sense” is a great scary movie. It’s a great movie in general. He was nominated three times by the Academy the year of its release (as writer, director and producer). He’s gone from writing and directing Oscar nominated films, to merely producing films that will never ever be mentioned with the words “academy” or “awards.” Razzie maybe. Ok so I didn’t hate his latest endeavor “Devil” because it has a premise too great to completely ignore: five strangers are stuck in an elevator in a high-rise building and one of them is actually the devil in disguise hell-bent on taking the lives of the other four passengers. As great as is its that Mr. Shyamalan neither wrote the screenplay nor directed the film, it still has his mark all over it which will most likely turn off many viewers. The film has some positives and it has some negatives, but overall I think I in the very least enjoyed myself.

Shyamalan gets things pretentiously underway even before the story begins. We see a “The Night Chronicles” logo which flashes the number “1.” Come to find out this is the first in an intended trilogy of films based on Shyamalan’s short stories. Oh brother. But then as eyeball roll-inducing as that is, we get some near opening titles which are plastered over some jaw-droppingly cool and disorienting upside-down shots of a city skyline. We will learn by the film’s end that at the beginning of the film, things were not always “right-side up.” Director John Erick Dowdle (of “Quarantine” and the still yet unreleased “The Poughkeepsie Tapes”) makes his first mistake by not eliminating screenwriter Brian Nelson’s unnecessary and borderline obnoxious narration. I’m sure Shyamalan made sure that one stayed. He always needs to shove down his viewers’ throats that they are watching a “story” as if we didn’t know already.

We’re told that sometimes the devil comes to earth, in disguise to claim people who have done bad things. Sometimes there are bad omens which show he’s on his way, such as a person committing suicide. And nearly four minutes into the movie, a woman leaps to his death from a skyscraper. Then we’re introduced to five characters who are all sharing the same elevator. We have a black security guard who’s just a temp (Bokeem Woodbine), an elderly woman who seems harmless (Jenny O’Hara), a younger business savvy-looking woman (Bojana Novakovic), a sleazy mattress salesman (Geoffrey Arend) and a mysterious mechanic (Logan Marshall-Green). After a few mintues the elevator stops. It seems to be just a simple malfunction. Even the security guards insist they will have the elevator running in just minutes. The guards Ramirez (Jacob Vargas) and Lustig (Matt Craven) can view the people in the elevator and can even talk to them through a loudspeaker, but the guards can’t hear the passengers. Minutes go by and these people begin to get a little stir crazy as would probably be the case in real life if you were stuck in an enclosed space with total strangers. But things take a turn for the worse when the lights flicker, go out, and the younger woman gets what appears to be a huge bite mark in her back. She’s bleeding and the security guards call the cops. The detective called to the scene just so happens to be the same guy investigating the suicide from earlier in the day. Detective Bowen (Chris Messina) communicates with the people in the elevator and pretty soon the body count begins to pile up in perfect Agatha Christie style.

The film succeeds in that it is creepy and claustrophobic which I enjoyed. It was fun trying to figure out how things would play out, although I’m certainly most viewers would likely guess who the “devil” is. This is sort of a third act twist or revelation that can either be seen as contrived or pretentious. I don’t know, take your pick. One we get closing shots of the city’s skyline, now in their proper upright place and the voiceover tells us that if the devil does exists at least it means there’s a God, I felt like I should have been sprayed with Holy water on the way out of the theater. A little preachy, but I can deal with it.

Overall I enjoyed watching "Devil" mostly because I tend to like movies that take place in tight places and play out in real time (the film is a swift 80 minutes). I had been intrigued by this movie ever since it’s fascinating trailer hit the internet months ago and I’m not sure that it lived up to my expectations, but it was pretty decent for what it gave us. I thought it had genuine moments of creepiness and like true great works in horror had moments where listening to the soundtrack was scarier than anything that could have been shown. I had always been interested in seeing a film Shyamalan thought up but didn’t write or direct, but I’m not quite sure Devil was the winning masterpiece his fans have been waiting for. This isn’t “The Sixth Sense” no matter how much you hoped it would be. GRADE: B-

Whoa! This blog looks just like my old one! It's
on a totally different subject but it has pretty much the same page layout and design. Outstanding choice of colors!