Twin Beaks: “Legends of the Guardians: The Owls of the Ga’Hoole” is…a Hoot 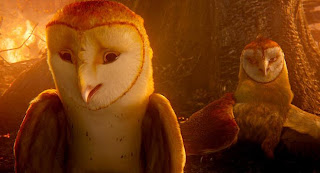 The only thing that really drags down Zack Snyder’s high flying owl adventure “Legends of the Guardians” is what I’m calling his trademark “slow motion hero shot” in which the characters are forced into slow motion while pouncing or attacking an enemy or accomplishing some other heroic action. Twice is cool, a dozen times is over doing it. But what else do you expect from the director of “300.” His fetish for slow motion shots abound, but at least this owl flick is entertaining for its ninety minute runtime.

I never thought I’d find a story about CGI owls interesting in the slightest. I have to say that I didn’t really love the film, but it was enjoyable for what it was. It’s basically “Apocalypto” with birds. We’re introduced to Soren (Jim Sturgess) a barn owl and his brother Kludd (Ryan Kwanten). Like most brothers in stories like these, there’s a hint of jealousy between the brothers. They like hearing stories their father tells of these owl soldiers known as the “Guardians of Ga’Hoole.” And one day after ruffling each others feathers, Soren and Kludd find themselves knocked out of their nest and on the dangerous forest ground. Since they’re young owls they haven’t fully developed their ability to fly. They’re quickly snatched up by some scary owls who go around snatching up owlets to brainwash and form an army lead by the evil Metalbeak (Joel Egerton) and his equally intimidating Nyra (Helen Mirren). Mirren is intimating even as an animated bird.

Eventually Soren is able to escape with his new friend Gylfie. They want to seek out the Guardians to help rescue his brother and all of the other kidnapped owls. We meet a bunch of other colorful characters along the way including a Burrowing Owl named Digger (David Wenham). Eventually they find the Guardians who help them making things right again in the owl kingdom. I never realized how ridiculous this plot seems once it’s all written out especially because all of the characters are OWLS. Of course the film is based on a series of books called “Guardians of Ga’Hoole.”

Zack Snyder seems like an odd choice to directed a family-friendly (although the film is pretty dark) animated film from the studio that brought us the overrated penguin flick “Happy Feet.” And while at first it does seem odd, as the film progresses it makes more sense. A bunch of soldiers who are basically the underdogs trying to fight off a band of evil bad guys? Isn’t that the plot of “300?” Of course this story works much better in animated form because we’re not distracted by annoying CGI effects mixed with live action performances. The whole thing is CGI so there’s that. The movie moves along swiftly enough, maybe too fast because as many colorful characters there are here, we don’t get to known them very well. The film seems to favor action over character for the most part, but I’m not too shocked by that.

Over all I found myself enjoying “Legends of the Guardians.” I thought the animation was pretty specactualr and the film did work as a fun 3D experience. It was immersive 3D rather than gimmick 3D (my personal favorite) but it worked for the film’s style. And I simply love the song “To the Sky” by the appropriately named Owl City. This is a movie you might just find yourself giving a hoot about. GRADE: B

The the next occasion I read a weblog, Lets hope so it doesn't disappoint me as much as this. I am talking about, I know it was my choice to read, but I personally thought you'd have some thing intriguing to say. All I hear is a lot of whining about something you could fix if you weren't too busy trying to find attention. http://noticiasdealcorcon.com

I have been browsing on-line more than three hours lately, but I never found any attention-grabbing article like yours. It's pretty value enough for me. Personally, if all webmasters and bloggers made just right content material as you probably did, the internet will be much more useful than ever before.   hadeel web

I am sure this article has touched all the internet viewers, its really really
pleasant piece of writing on building up new website. 대구오피