Girlfight: A Great Cast Barely Saves “You Again” From Being Clichéd Tripe 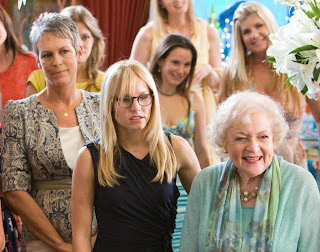 “You Again” is a pure “Hollywood” film through and through. It features famous actors getting caught in unoriginal and preposterous situations and then wraps everything up neatly in a bow. These types of films aren’t always so horrendous in my eyes because sometimes just the littlest thing can make a movie worth seeing. Sometimes you get attached to a character or a performer and you’re willing to stick with them through all the ridiculousness that inevitably ensues. Take for instance a scene in “You Again” in which actress Jamie Lee Curtis uses the bathroom of her archnemesis Sigourney Weaver. She accidentally knocks one of Sigourney’s earrings down the drain and decides to retrieve it by kicking the sink’s pipe, which you guessed it, begins to spray water all over her at full force. She then mistakenly rips off a piece of Sigourney’s dress and uses it as a towel. Hilarious ensues! Why is this scene in this film? Is it funny to watch Jamie Lee Curtis being sprayed with water? Not really. It’s scenes like this that bog down “You Again.” It’s a film with a wonderful premise that could have gone a lot further with its story but alas that pesky PG rating sits there with its tongue out, mocking us for seeing it without anyone under the age of 12. (Watch “Freaky Friday” if you want to see a great PG rated film with a great performance from Ms. Curtis)

Sigourney Weaver and Jamie Lee Curtis are both great actresses. How Curtis has managed to avoid being nominated for an Oscar is beyond me, but I guess that is the curse of beginning your Hollywood career as a “Scream Queen.” Here they certainly make “You Again” worth watching if only because their snide and savvy ways just simply make themselves shine. Kristin Bell plays Marni who just found out that her brother is marrying Joanna (Odette Yustman) the mean girl from high school who made her life a living hell. Curtis is her mom Gail who also finds out that Joanna’s Aunt Romona (Weaver) was her former best friend from high school. They had a huge falling out, mostly for reasons that will come to light later on. The point is that these two generations of women are forced to deal with a dark past and look at it square in the face. I wasn’t too shocked by any of the film’s revelations but at least the actors give good performances.

The possibilities with a story like this are just simply endless, but “You Again” would rather play things a little too safe. Think “Death Becomes Her” without all the dark Looney Tunes violence. This is a situation ripe for black comedy, but the filmmakers would rather go for family comedy. It’s not too shocking to find out that director Andy Fickman directed two Disney movies starring The Rock (who also cameos here). Though he did make “She’s the Man” which, as crazy as that entire movie was, sort of ran with its silly premise and never felt as restrained as things are here. Screenwriter Moe Jelline can't even really find anything funny for Betty White, as Grandma Bunny, to do. She just sort of hangs around making wisecracks here and there in sitcom fashion. She was so well integrated in last summer’s “The Proposal” it’s a shame she’s not given as much to do (save for a priceless encounter with one of her high school rivals, which should have been something the film focused on).

Overall the film was easy to sit through and I was entertained enough. But you can label this as a disappointment. I was eager to see some of my favorite actresses duke it out. And yeah there is some fighting here and there, and I did find myself laughing, but the film had the potential to be great. It was nice to see Curtis on screen again though. Why she continues to be one of Hollywood’s most criminally underused actresses is beyond me. GRADE: B-