Maid to Order: “The Help” is a Wonderful Ensemble Drama 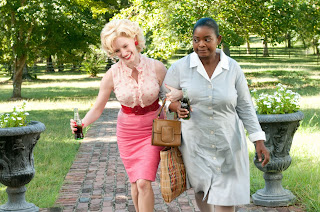 I don’t know if “The Help” will be remembered as a landmark in race relations cinema the way “The Color Purple” or “Do the Right Thing” are but darned if it isn’t just a fun, entertaining piece of moving filmmaking (and certainly much lighter and easier to digest). It’s sort of reminded me of a weird hybrid of “Hairspray” (without the songs) and “Steel Magnolias.” It’s definitely the “chick flick” of the summer, but don’t let that scare you away my fellow friends from Mars, “The Help” is a moving piece of work and if you’re a fan of any of the ladies on display you might find yourself getting sucked in to this thing. Deep down it’s essentially a Lifetime movie in big budget clothing, but the actors are so good you might actually forget that you’re most likely completely surrounded by middle aged women.

Being a huge Emma Stone fan I was excited to see her breakout into something more than just silly comedies. Here she does drama straight on as Skeeter, a young aspiring journalist living in 1950s Jackson, Mississippi. She hasn’t been “courting” so naturally her mother (an always wonderful Allison Janney) thinks she’s a lesbian. She’s too busy to meet boys. She’d rather be a career woman which was a big no no in that time. Women’s jobs back then were to be wives and mothers. And the jobs of black women in those days were as maids and servants. This is the story of Aibileen (Viola Davis), a lifelong maid who spends her days working for snobby white women. She practically raises these kids and in fact they look up to her more than their own mother. Skeeter has a crazy idea to write an article the point of view of “the help:” the black maids in town.

This of course is mostly unheard of because as we all recall black and white matters were an extremely hot issue back then and someone like Skeeter could get in a lot of trouble for giving these poor women a voice. One of which is Minny (a radiant Octavia Spencer) who gets a job working for Jessica Chastain’s Celia Foote, a white high society woman who has been ostracized by her fellow bridge club ladies for reasons to be revealed later in the story. It is the relationship between Celia and Minny truly form the heart and soul of this movie. Sure Emma Stone is great and Viola Davis can act circles around anyone who comes near her, but the Celia/Minny scenes truly shine. Spencer, who finally gets a role to sink her teeth into had previously played bit parts such as “troubled woman,” “bank co-worker,” and “big customer.” Here she gives an Oscar worthy performance as a sassy maid who won’t let anything bring her down, even a rivalry with her former employer played with perfect white bitch nastiness by Bryce Dallas Howard.

“The Help” is directed by Taylor Tate (he’s white), who wrote the script from Kathryn Stockett’s novel, and he somehow really gets inside these women. Her certainly seems to have gotten the period details right. Although I can't be certain since this takes place way before my time. On paper most of these roles are simply “the good guy” or “the bad guy” but the actresses make them their own. Stone’s character exists essentially as a plot device: we’re not really sure why she cares for these maids but the other white women don’t so much. She’s so good as a woman determined to make a difference and not care about what others think she almost makes you forget we’ve seen characters like this dozens of times before. Howard, as the mean girl queen bee, is made to be so hateful that even when Minny does a despicable thing, you cheer instead of sneer. Janney’s character who we think is just a racist like all the others even has a chance to redeem herself by the film’s end and forms one of the film’s more satisfying minor character arcs. Even Sissy Spacek is great in a tiny role as Howard’s mother.

If you’re like me, and you’re not a middle aged woman, you probably wanted to see “The Help” because you like Emma Stone or because you heard about Viola Davis’ great performance. Yeah they’re wonderful, but Chastain and Spencer are where it’s at. Chastain is a star on the rise (with two other magnetic performances in The Tree of Life and The Debt) and even though she sound just like Daryl Hannah in “Steel Magnolias” (tell me I’m wrong) she really makes this role her own. And Spencer is just radiant as well, she’s so lovable and easy to root for. Even if it has a fault or two “The Help” was definitely a pleasant surprise. GRADE: B+

Hurrah, that's what I was seeking for, what a
information! existing here at this website,
thanks admin of this web site.