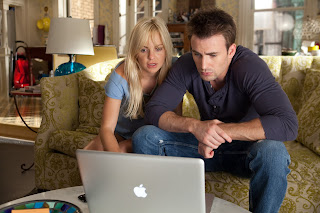 Romantic comedies are like horror films: both are typically riddled with clichés. They always tend to follow the formula yet people turn out for them over and over again. There’s a reason: they work. Why mess with a particularly successful formula? Sure once in a while a movie breaks the mold and tries something new. The latest rom-com starring perennially funny girl Anna Faris does not break the mold. In fact, it rarely deviates from the mold. Here we have a pretty girl, who has had lots of relationships, yet they all never work out. What’s a hot chick like Anna Faris to do? Maybe the equally hot guy across the hall that looks a lot like Chris Evans is the man of her dreams? No way, he’s a womanizing jerk! How could they ever be the perfect match? Oh the clichés, let me count the ways.

A romantic comedy’s success firmly stands on how well the romantic leads work together. If there is no chemistry between the actors there can be no chemistry between the characters. There is something between Anna Faris, who plays Ally Darling and Chris Evans who plays Colin Shea. Ally is in sort of a rut. She’s just been fired from her marketing job and then she makes the biggest mistake a woman her age can make: she follows advice from one of those girly magazines. She realizes that she’s slept with way too many guys (the national average is apparently 10.5) and her friends tell her that if she keeps having failed relationships she’s doomed to never settle down and get married. This begins a whole crusade to track down her ex-boyfriends in hopes that perhaps one of them has changed enough to be her dream man. Spoiler alert: he’s actually waiting across the hall. Ally enlists the help of her too-jock-like-to-be-a-struggling-musician across the hall neighbor Colin (Evans). Apparently Colin knows how to get dirt on people since he used to go on stakeouts with his cop dad. Anyone with half a brain can tell you that Colin and Ally will end up together in the end (but not before a temporary setback in which they have an argument or fight and then one of them seeks the other out to professes their love to the other in which the other one realizes they love the other one too and then they kiss and live happily ever after).

To be honest, I rooted for Ally and Colin but that’s mostly because I find Faris and Evans to be some of the most charming actors working today. They’re so likable you forget that the script refuses to let them be together until the last 15 minutes or so. And Ally is such an beautiful girl you wonder why she’s attracted so many losers. These include a puppeteer played by Andy Samberg, her creepy ex-boss played by Joel McHale, and a former fatty but newly svelte and engaged guy played by Faris’ real life beau Chris Pratt. With all these obvious losers behind her, I’m not quite sure why Ally wouldn’t just immediately throw herself at Colin, but I guess even some women who’ve slept with 20 guys have some standards. Meanwhile, there’s a subplot involving Ally’s younger sister Daisy’s (Ari Graynor) wedding and her attempts to avoid her overbearing mother played wonderfully by Blythe Danner.

I think one of the major flaws of the film is its attempts to be just plain filthy. Ally, Daisy, and their friends talk about sex and vaginas and penises, and while it’s refreshing to here women talk about this stuff rather than men, it felt rather forced to me. It was as if they were trying to compete with movies like “Bridesmaids” in the raunch department. Screenwriters Gabrielle Allan and Jennifer Crittenden (and director Mark Mylod) seem more interested in finding ways to get Colin and Ally undressed than to have any character say or do anything remotely profound. And the comedy part of this romantic comedy sort of lacks too. Faris is hilarious and she has a few standout moments and lines, but otherwise she’s playing it remotely safe. She’s as likable as ever, but she has yet to find a starring role that really plays to her brilliant comedic talents.

Ally and Colin belong together, but the script says they can’t be together until the end of the movie. Meanwhile we have to sit through lots of jokes about creepy guys sniffing their own crotches, a neighbor who supposedly has sex with his dog and a completely random game of Strip HORSE at the TD Garden arena. “What’s Your Number?” adds nothing new to a repeatedly worn out genre and can only be redeemed because of the two completely likable leads. One day I believe Faris will get the script she truly deserves, but until then I guess this will have to do. GRADE: C+

I'm more than happy to find this site. I wanted to thank you for your time just for this wonderful
read!! I definitely really liked every little bit
of it and i also have you book marked to see new information in your site.