A Cult Above the Rest: Kevin Smith Gets Preachy in “Red State” 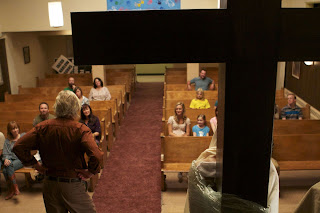 If you don’t like political views being shoved down you’re throat then you probably shouldn’t see “Red State.” You also probably shouldn’t see it if you don’t like watching people being violently executed while bound to a crucifix. Kevin Smith no stranger to controversy in the cinematic world has unleashed a new kind of film that is unlike anything he has done before. And people thought “Cop Out” was uncharacteristic. “Red State” is not a comedy whatsoever. It’s about a religious cult somewhere in Middle America who persecute all types of sexual deviancy including what they see as the ultimate perversion: homosexuality. These fundamentalists see themselves as some kind of martyrs whose job it is to destroy these sinners all the while they, the last time I checked, committing a sing themselves BECAUSE THEY ARE MURDERING PEOPLE.

The film starts off similarly to movies like “Hostel” where horny teenage boys set off to have some promiscuous sex and instead find themselves being bound and gagged and tortured. Jared (Kyle Gallner) and his two buddies visit a sex internet site with the intention of having sex with an older woman. They drive out that night to meet up where they encounter Sarah Cooper (Melissa Leo). She offers them some beer first. What teenage boy wouldn’t accept beer from a middle aged woman in a trailer? As soon as they begin stripping off their clothes it’s revealed they’ve been drugged and unfortunately sex is the last thing they will be getting this evening. Jared wakes up in a metal cage where he witnesses a preacher named Abin Cooper (Michael Parks) giving a hate-filled sermon about the evils of homosexuality and other sexual abominations. Good thing Jared is not a homosexual right? Wrong.

This is where the film sort of lost me because having three straight teenage boys being persecuted by this “Five Points Church” religious cult didn’t quite make too much sense to me. The film opens with these people protesting a gay teenager’s funeral. There is so much debating and discussions revolving around the idea of homosexuality that I thought it was strange that the main characters being attacked by these people aren’t even homosexual. Sarah and Abin’s excuse for targeting these boys is that they were willing to all have sexual relations with Sarah all at once, which makes it even worse apparently. I don’t know, that all seemed fishy to me at best. I can imagine that kind of heat Smith would have taken if he actually had gay main characters being bound and gagged. What kind of example could he be setting? He’s obviously not on the fundamentalist side, but that would have been much too hard to witness.

The actual filmmaking here itself feels sort of shotty at best. Smith came from his gritty, independent roots and he definitely returns to them here. The film has a very low budget, digital look and feel but instead of giving the film a grainy look, it really just feels “direct-to-video” instead. I’m not quite surprised the film wasn’t picked up for theatrical distribution after premiering at Sundance. And I’m not even really quite sure what to even classify this thing. I would assume it’s supposed to be horror and while it has shocking parts, I was never that quite scared. The idea of a group of people seeking out “deviants” and executing them for their “sins” is scary itself, but I think the execution here is a little off. The film goes from being “Hostel” to being a hostage shootout movie once the film shifts to John Goodman’s character an AFT agent who becomes aware that these church freaks not only have hostages, but entire machine gun arsenal.

I know Kevin Smith is a talented guy, I’ve never been his biggest fan, but he certainly has a strong cult following. I appreciate him wanting to break away from his more standard gross out comedies. I mean what film fan wouldn’t want to direct their own horror movie? This is his. I can’t quite say it’s completely successful, but it’s not bad for a filmmaker who has never worked in this genre before. The film features some good performances (especially Leo who nails every movie she’s in) but the film’s odd tonal shifts and low budget feel sort of work against it. GRADE: C+

I constantly spent my half an hour to read this weblog's articles
or reviews all the time along with a cup of coffee.

Hello to every body, it's my first pay a quick visit of this webpage; this web site
consists of remarkable and genuinely good material in favor of visitors.

The standard security provided by Acrobat PDF consists of two different methods and two different passwords, "user password" and "owner password".
It is possible to frequently go to a person's Trade server aided by the
mobile phone network, or possibly function traditionally, or
simply cancel it logon. *A Quick Tip: If you are waiting for something
really important cross reference this with your electronic calendar.