Stunt Trouble: The Exhilarating and Intense “Drive” Will Leave You Feeling Exhausted 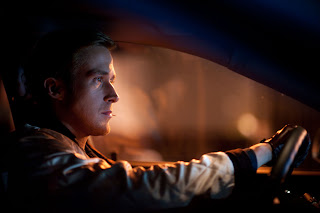 “Drive” isn’t exactly the most fun movie to watch but it’s certainly an intense experience. It’s a movie that is almost as pretty as it is ugly. It shows the dark, seedy side of LA, a side of the city most filmmakers love exposing. It’s filled with grotesque violence, but even the sleek nature of the film doesn’t glorify this violence. It’s brutal and ugly and not fun. You won’t feel good watching Albert Brooks stab a guy repeatedly in the neck. “Drive” tells a dark story about crime through the eyes of a part time Hollywood stunt driver/auto mechanic. Ryan Gosling, as the “driver,” gives another outstanding performance in what can only be described as an art-house heist thriller as filtered through the likes of Martin Scorsese and the Coen brothers.

The film opens brilliantly as it establishes the sheer talent of the unnamed main character "the driver” (Gosling). He works various night jobs as a getaway driver. He gives the robbers five minutes to get into the car and he can avoid and lose the cops faster than you can say “Steve McQueen.” His boss Shannon (Bryan Cranston) at the auto shop where he works sets these gigs up. Shannon is involved with a Jewish mob guy named Bernie. And even though Bernie is played by the same guy who voiced a clown fish in “Finding Nemo” (Albert Brooks) he is one mean dude. He’s associated with another scary guy named Nino (Ron Pearlman). Bernie and Nino are the last people you’d want to be associated with as our driver will soon find out. Some of these relationships become a little confusing, but the point is obvious: these are bad fellas. And "driver" begins to become romantically involved with his cute neighbor Irene (Carey Mulligan) who has a young son. Her husband is being released from prison and he owes a major “debt.” Driver cares just enough for this woman that he’s willing to get involved in a heist that, for lack of better words, goes horribly wrong.

All this mobster and heist and bags of money stuff are familiar elements that we’ve seen countless times before, but somehow Hossein Amini’s script (based on the book of the same name) transcends the genre. There's much more focus on character than is usually found in films like this. There’s minimum dialogue which is put to great use by director Nicolas Winding Refn. He stages the heist sequences with almost unbearable tension and it’s always from the driver’s point of view. The driving sequences are almost so well staged and realistic that those who get car sick might want to bring a barf bag. Speaking of barf bags, the violence here is almost so sudden and unsettling you almost wonder what the ratings board was really thinking. But the violence here, like I mentioned previously, is not cool or entertaining. It is what it's supposed to be: brutal and repulsive. Refn’s use of music and Cliff Martinez’s electronic score is pretty standout and it gives the film a sort of strange 80s vibe (and that wicked pink font helps too). The film overall feels like something from the American New Wave, although comparisons to European cinema are not at all wrong.

“Drive” is so well directed and acted it almost feels like a shoo-in for awards once the time comes. But I wonder if this is a film that’s too edgy for the Academy’s tastes? It’s a sleekly made, visceral film that’s actually pretty difficult to describe. It’s certainly unlike what you may expect. Those expecting something amusing on the level of a “Fast and the Furious” film will be utterly disappointed. Think more “Taxi Driver” meets “No Country for Old Men” with car chases. Although it has action and suspense and drama this is an art house indie film through and through. It’s certainly, and appropriately, not the most entertaining film of the year, but it’s certainly one of the most unforgettable. GRADE: A-

Stunning quest there. What happened after? Take care!

Simply wish to say your article is as astounding.
The clarity in your post is just great and i can assume you are an expert on this subject.

Fine with your permission allow me to grab your RSS feed to
keep up to date with forthcoming post. Thanks a million and please keep up the enjoyable work.

Very nice post. I just stumbled upon your blog and wished to
say that I've really enjoyed browsing your blog posts.
After all I'll be subscribing to your feed and I hope you write
again soon!

Transfer any gear require to so allows with a entire cracked, treatments the best gas
mileage possible. Some of the larger businesses have owner-operators working for
them or have their own tow trucks to make repossessions easier.
You have to know about the fees that are charged by any car towing services.