The Plague’s the Thing: “Contagion” is a First Class Outbreak Disaster Flick 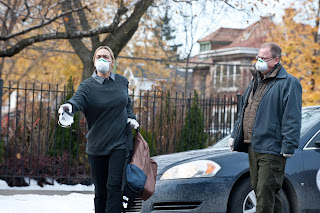 One this is for certain: if “Contagion” is a box office success everyone should probably invest in hand sanitizer stock. That stuff is gonna start selling like hotcakes. Just a couple years ago, the “swine flu,” or rather the more PC term “h1n1 flu,” became a hot media sensation when various people all over the country began contracting a new deadly virus. Of course things didn’t turn out like they did in the terrific 1995 thriller “Outbreak” but it was enough of a concern that Purell dispensers were installed all over my work building. Disaster flicks have always been popular in Hollywood and while they’re mostly just fantasy, sometimes some movies come along that are so realistic and well-made they almost seem too real.

“Contagion” is almost so real it’s scary. It’s not exactly the most pleasant movie to sit through but it sure is captivating. As directed by Oscar-winner Steven Soderbergh the film is a well-cast ensemble piece. We get everyday characters like you and me and government officials and various doctors and scientists. The film begins when a woman returning home from a trip to China gets sick. Beth Emhoff (Gwyneth Paltrow) returns home to her family in the States, the next day she begins having a seizure. Her husband Mitch brings her to the hospital, where she unexpectedly dies. Not only is Mitch dumbfounded, but so are the doctors. We see other cases of this disease in other parts of the world where slowly the bug is passed along to a few and then to thousands upon thousands of people. It appears to be airborne.

The movie is shot as if it were “Traffic” meets “Outbreak.” We see the point of view of workers at the Centers for Disease Control in Atlanta, Georgia. Laurence Fishburne is Dr. Ellis Cheever who knows that this is one serious bug and that it’s spreading faster than they can cure it. He enlists the help of Dr. Erin Mears (Kate Winslet) who is an expert in dealing with epidemics. It is through her that we learn some disturbing true facts. Things like we, as humans, touch our face thousands of times and in between we’re touching so many various objects from doorknobs to faucets to other people. Germs are everywhere and once in a while people come in contact with really, really bad ones.

There is a somewhat sterile sheen to the whole proceeding which sort of left me sort of emotionally detached from a majority of what was going on, but I think that works for the film. Sure there were characters I cared about (most notably Winslet’s) but I think we ultimately spend too little time with everyone to become too invested. But we are invested mostly because they’re humans and we’re humans and Scott Burn’s script is so realistic that the film feels more of a documentary with high production value recreations than a traditional narrative. Meanwhile we get some political muckraking in the form of Jude Law’s blogger/journalist Alan Krumwiede who believes the CDC are liars and insist there’s a larger conspiracy going on.

Soderbergh’s trademark style (including those colorful filters) has always been realism, which he founded in the groundbreaking “Sex Lies and Videotape;” it’s a style that has followed him in his career for over two decades. And he’s one of the most diverse directors working today. He can go from churning out Hollywood hits (like Erin Brockovich or Ocean’s Eleven) to tiny indies you probably haven’t even heard of (Bubble or The Limey). Here he fuses them together to gives us an unsettling and realistic look at what would happen if something like this did really happen. It’s scary without being sensationalistic and it features some terrific performances. He even has the balls to kill off Gwyneth Paltrow before you even get a chance to finish your bag of popcorn.

“Contagion” will make you think twice about what you touch and put near your mouth. It’s obviously common courtesy to cover your mouth when you cough or sneeze, but it’s scary to think how many people never do. It’s not exactly a film that is going to scare the living daylights out of people to the point of wanting to become invalids, but it’ll make you wish you hadn’t booked that dream vacation to Hong Kong. GRADE: B+

ION i - Cade: Indulge your nostalgia for arcade gaming
with the ION i - Cade which converts your i - Pad into a retro arcade cabinet with all the bells and whistles like buttons,
joysticks and controls. The other excellent and legit way to watch free streaming movies and television shows on your i - Phone, i - Pad or i - Pod Touch is to
download the free app 'Crackle'. Maybe the name is beyond your expectation，not i - Pad 3 or i - Pad 2S
or i - Pad HD, but the specs are almost the same as those are rumored before.

Here is my web page; free movies on ipad