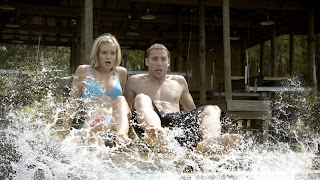 I know you’re dying to know whether “Shark Night 3D” is better or worse than last year’s surprisingly fun financial bomb “Piranha 3D.” It’s worse. But it has entertainment value if you enjoy watching hot people being eating by sharks. I can imagine most people being disappointed with the lack of hardcore gore, lack of bare breasts and an unfortunate lack of tongue-in-cheek fun. This is probably what “Piranha 3D” could have been but I’m extremely grateful it wasn’t. Now that’s not to say that “Shark Night 3D” is a total loss, because it’s not. It’s a stupid movie that gets stupider as it goes along and it’s pretty much pure junk but who doesn’t like some cinematic crap every once in a while?

“Shark Night 3D” offers exactly what you expect and nothing more. It has sharks and it takes place mostly at night and it’s in three dimensions. The story, if anyone even cares, revolves around college coed Sara (Sara Paxton showing about a total of 1.5 emotions throughout) inviting her friends to her Louisiana lake house on the bayou. It’s pretty isolated. So isolated in fact that not only do they not get cell service there, but they don’t even have a landline (Heck even the Professor was able to make a phone on Gilligan’s Island I think). Sara and her friends even have to take a speedboat to get to her place. But that’s not before they run into the redneck bayou locals. One of which is way too Abercrombie & Fitch looking to be such a creep. His name is Dennis (Chris Carmack) and it seems he and Sara have a sordid past!

Sara’s friends include people of varying degrees of hotness and handsomeness. Most, however, are of average or below average acting ability. There’s her pre-med guy friend Nick (Dustin Milligan)who just so happens to be attracted to Sara. American Idol runner up Katherine McPhee is there and the token Latina girl and the token Black guy and the skinny goofy guy who somehow thinks he’s a ladies man, and the blonde male model guy (who is literally a male model in the movie). Yes it’s a typical MTV Spring Break down on the lake. Everything is fine until the sharks show up and start eating these folks. There's blood spilt, but nothing too gruesome enough to divert your eyes. This is PG-13 stuff here after all.

Of course after the first attack the best idea would be to not go in the water. But our fearless writers Will Hayes and Jesse Studenberg have found a way around that by having not only fishy CGI villains, but human ones as well. Remember I mentioned those creepy locals? They just might have something to do with sharks hanging around in a lake. And it just might have something to do with Shark Week. But why spoil all the fun?

Director David R. Ellis, who is no stranger to chintzy, silly movies like this having directed two Final Destination films and even Snakes on a Plane, scores points mostly for wanting the title of the film to be “Untitled 3D Shark Thriller.” On a technical level he mostly just gets the job done. He places his camera in the usual spots (lots of shark POVs and lots of ogling of tanned female and male skin) and there are some fun uses of that gimmick known these days as 3D. Nothing too spectacular (nothing has yet to best Final Destination 5 this summer) although the “driving to the lake house” montage had some cool depth perception.

Look, here’s the short of it: This is pretty dumb movie. Ok it’s a very dumb movie. You will probably laugh. At it. You may even jump once or twice (yeah I jumped, sue me) and it has some genuinely scary... opening titles. The biggest problem is that it seems to be taking itself a little too seriously. But if you’re paying to see a movie called "Shark Night 3D," you know what you’re getting into. Don’t say I didn’t warn you. GRADE: B-

I think the admin of this website is genuinely working hard in support of his web site, since here
every stuff is quality based stuff.

Have a look at my web site :: Best online casino