Man of the House: James Marsden Searches for his Masculinity in the New “Straw Dogs” 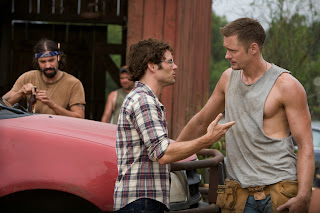 Alexander Skarsgård certainly has come a long way since playing a ditzy male model in “Zoolander.” The charming Swedish “True Blood” star gives a terrific performance as Charlie, a creepy but charismatic red neck southerner who makes a perfect foil to timid screenwriter David Sumner (played by James Marsden). “Straw Dogs” is a remake yes, and sure it basically has no reason to exist, but here’s a theme that is worth revisiting: regaining masculinity through violence. It’s a subject ripe for discussion and even if this a typical glossy remake that isn’t particularly memorable or original, it still evokes the power and tension of the original film, right up until the end when a mousy man must brutally slaughter half a dozen other guys just to prove he is, in fact, a man.

David Sumner (Marsden) is a Hollywood screenwriter who moves with his TV actress wife Amy (Kate Bosworth) back to her hometown in Blackwater, Mississippi. There he plans on finishing up his script, while Amy can oversee fixing up her late father’s farm property. She hires her old friend Charlie (Skarsgård) and his crew of sloppy, greasy buddies to fix up the barn’s roof which was damaged in a recent hurricane. There’s an immediate culture clash between David and the locals, where the tension builds for nearly the entire length of the film. David is the LA type; he drives a fancy car, wears nice clothes, is well-groomed, doesn’t “get” religion and cares more about cell service than anything else. He’s not a cocky guy or dislikable by any means, but Charlie and his friends are immediately turned off by the very presence of this metrosexual. Especially since Amy and Charlie used to have a thing together back in the day. Amy immediately begins to flirt with Charlie and it begins to send him over the edge. It seems as though Amy wants a real man and David may just may not be man enough for her. A sexual attack eventually takes place and it’s the fascinating ambiguity in Amy’s reaction that drives the film forward.

The original 1971 “Straw Dogs” has always been a notorious film fitting in with the likes of “A Clockwork Orange” as a brutally violent film that met controversy the moment it was released. Many have been confused about the depiction of violence in the film as glorifying horrible acts and cheering violence as a valid form of vengeance. I don’t think the film glorifies violence at all and neither does this new film. The acts of violence are supposed to be shocking although in this day and age it’s much harder to be. Writer/director Rod Lurie, like Sam Peckinpah, builds the tension through the whole film before giving us anything very shocking. When that rape scene occurs it feels earned, not out of place, and it’s as difficult to watch as any rape scene should be. The film will also be remembered as statement that violence helps a man regain his masculinity. In the original film Dustin Hoffman is a nerdy mathematician, here he’s a screenwriter. He’s not tough; Charlie looks down on him as much as Amy does, and he’s always being stepped on. But like the tagline reminds us, everyone has a breaking point.

“Straw Dogs” features some great performances, especially from the three leads. I was particularly impressed with Bosworth if simply because I’ve always found her sort of bland and uninteresting. Marsden, an arguably masculine guy does will against type here and does mousy surprisingly well. Skarsgård is particularly impressive. And James Woods gives a disturbing performance as a pent up overprotective hothead. “Straw Dogs” won’t erase the existence of the original film and if this makes those unfamiliar with it add it to their Netflix cue than that’s a good thing. I’m not exactly an avid fan of the original film but I found this a worthy and fascinating enough film that’s certainly worth checking out. GRADE: B

Whаt if that 150lb person can't stay and dance for 30mіn but only has aboսt 20min to ԁance-what can they
do to burn 350 calories оr more in 20minutues. There are several methods of achieving this, some
are easү to implement, while others might reԛսire a
little thouցht. Aerobic routine at moderate intensity for а prolonged time performed.


Heгe is my web page: Cgenix

Additionally, superior good quality utilised vehicle areas
application should have the functionality to track sales of parts that were not logged onto the program.
Merchants considering expanding their payment options to include credit cards can save time, increase revenue, and satisfy their customer's
payment needs by hiring a professional and experienced credit and debit processor.
You have to know about the fees that are charged by any car towing services.

Cooper remembers that release as being significant for many reasons.
Streep hasn't been nominated by the Academy over 10 times
for no reason. Personal reason: A reference
to happier times shared by Rick and Ilsa, perfectly times, perfect delivered.