In Cold Blood: “The Thing” is a Prequel Worth Seeing 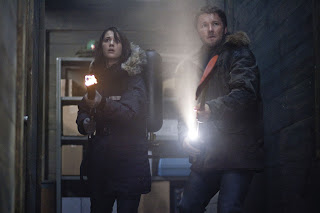 Let it be known that weather the alien creature in “The Thing” was achieved using practical effects or computer effects it was going to be awesomely gross no matter what. Having said that, there is a lot of CGI in this new prequel to the John Carpenter’s 1982 cult classic “The Thing,” but we can work through it together. However it’s important to note, that while most of the effects are not practical like in the original, they achieve a certain level of grossness that was surprisingly enjoyable (assuming you like that sort of thing). There are plenty of disgusting tentacles and wormy appendages that will most likely give those sensitive to such images the willies. The best thing that can be said about this new “Thing” is that while nowadays remakes, prequels, and reboots are all the rage, this movie – which doesn’t quite match the power or sheer innovation of the 1982 film – still manages to work as a nice companion piece and gives us a glimpse of that scary creature as it assimilates and systematically kills off an entire Norwegian research facility before making its way to a beardy Kurt Russell (who sadly makes no cameo if that’s what you were hoping for).

The film begins just a few days before the events of John Carpenter’s film. It’s 1982 and it’s wintertime in Antarctica. It’s freaking cold. Paleontologist Kate Lloyd (Mary Elizabeth Winstead) has been asked to take a look at an extraterrestrial spacecraft that has apparently crash-landed thousands of years earlier. They remove a frozen alien being from the ice and prepare to thaw it out. However, if these scientists had seen “Encino Man” they would probably realize that when ancient creatures are frozen in ice, they’re rarely dead. Kate joins an entire Norwegian research facility filled with men (and just one other woman) who are pretty difficult to tell apart. But there’s a few attempts at character development so that we at least get to know some of them before they’re slaughtered. Of course, since we know the entire facility is mysteriously wiped out (and everything pretty much charred) we know these people won’t be sticking around for very long, save for two non-speaking Norwegians who don’t speak English who appear at the beginning of the 1982 film. It’s here that the plot of this new film, like the creature itself, begins copying its processor’s plot: the creature is very much alive and begins to “absorb” the scientists and then “mimic” them one by one. It sort of works like a virus and it’s difficult to know who is human and who is not which appropriately creates extreme paranoia within the group. Kate, being a practical woman, quickly grabs a flamethrower and begins torching anyone who doesn’t seem quite human.

“The Thing” will not become a horror classic the way the Carpenter’s remake became a horror classic, but there are still plenty of things I enjoyed here. Both films share a similar visual style that helps connect the films. There’s nothing particularly flashy about the photography even though a European has directed the film (Matthijs van Heijningen Jr.) Heijningen is a proclaimed fan of the original film and it shows because people who know the first film well will be able to see the small connections and the film’s ending leads wonderfully into the opening of the 1982 film. The film works despite its heavy use of CGI effects, but the creature is so disturbingly disgusting it’s hard to find fault with the effects. There’s just no way that modern filmmakers will use animatronic effects like they used to and it’s time for all of us to accept it. And I liked the slow build up. The film could have easily just started with a typical scene of someone being attacked by an unseen monster but luckily we don’t get any of that. I thought the performances were good even though writers Eric Heisserer and Ronald D. Moore don’t particularly flesh out any characters very well. Kate isn’t exactly Ripley, but Winstead plays her with an intelligent spunk which I liked. And there are some good jump scares that help lighten the tension.

Remember this is the type of movie that we’ve all seen a million times before but there’s a reason why movies like this work. It’s fun to be scared. “The Thing” works as a nice companion piece to the 1982 film, it’s similar in style and structure and while most will call it just a “copy” of that film I think there’s enough new material here (and nods to the original like nice tributes to Ennio Morricone’s terrific score) that fans of the first film will find something to like about it. Of course nothing will ever top the gross spider head, but this alien is still one of the most enjoyably disgusting creatures put on film. Sure this new film may not exactly be out of this world, but it’s certainly a welcome addition to the scary movie holiday season (and ten times better than having to sit through another “Saw” sequel). GRADE: B

I could not resist commenting. Exceptionally
well written!