Dance Dance Revolution: In Defense of the “Footloose” Remake 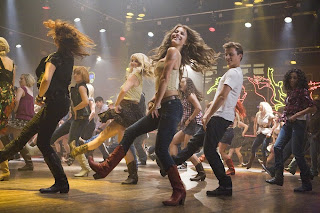 The new “Footloose” movie is a lot better than it has any right to be. And that’s not because it’s remake of a movie. It’s because it’s a remake of a movie that was bad to begin with. I mean honestly, the film’s story just doesn’t make any sense. A town where dancing is banned? Dancing! Banned? A few kids get killed in a car accident after dancing (and drinking) and apparently the dancing caused them to crash, not the elevated alcohol levels. It was lame and cheesy even for an 80s movie, so therefore this story, which is basically the exact same thing, should make even less sense taking place in the age of iPods and “Dancing with the Stars.” And thankfully there are no references to Twitter or Facebook. Therefore, I present the idea that this new “Footloose” is not only a decent and fun movie, but it might even improve upon its original inspiration. Is Herbert Ross’ “Footloose” really all that special? Sure it helped launch Kevin Bacon’s career (which actually started four years earlier in “Friday the 13th“) but what has really stuck are those catchy tunes that make their appearances every now and then at weddings and other social gatherings that involve (legal) dancing. Kenny Loggin’s title track is infectious and it’s even more so in the new film’s opening credit sequence which also follows many happy feet as they bust a move. Except this time the characters know the song and sing along as if they all had seen the original film and maybe that’s possible because I think every teenager in this movie could probably win “So You Think You Can Dance.” But then tragedy strikes and public dancing is made illegal for anyone under the age of 18.

The town of Bomont, Georgia is a religious town and its bible thumping preacher Rev. Shaw Moore (Dennis Quaid) is part of the board which made dancing (and playing loud music) a criminal offense much to everyone’s chagrin including his own teen daughter Ariel (Julianne Hough). Shaw’s own son was one of the kids killed in the car wreck and he’s vowed not to let it happen again. That is until new kid Ren MacCormack (Kenny Wormald) swaggers into town to live with his aunt and uncle. He’s from Boston and this supposed bad boy doesn’t get how dancing can be illegal. He butts head with the local deputy who gives him a citation for cranking up some tunes too loud in his VW Beetle, he catches the attention of Ariel even though she’s in a doomed to fail relationship with a creepy redneck guy, and befriends Willard (Miles Teller) who effortlessly steals every scene he’s in. Seriously, Mr. Teller is a great and charming actor. He was also great in “Rabbit Hole” which you should go out and rent right now if you haven’t seen it. Some scenes involve Ariel clashing with her dad because when you restrict teens from being able to dance it can cause some seriously deviant behavior (like dating creepy redneck guys). It’s only a matter of time before Ariel and Ren join forces to rebel against the oppressive elders.

But let’s get to the point, why does one see a movie called “Footloose”? The dancing! Except that since it’s illegal in this movie there’s not exactly a lot of it, but when it happens it’s great. There’s some pretty great choreography going on here. Ren can certainly bust a move (he was on the gymnastics team at his old high school, if that’s not badass I don’t know what is) and when he gets angry and frustrated he lets it all out in a recreation of Kevin Bacon’s famous “angry abandoned warehouse dance.” It was corny then and it’s still corny now. Some cheese is simply timeless. I really enjoyed a sequence where Ren takes Ariel, Willard and Willard’s girlfriend Rusty (Ziah Colon) to a line dancing bar in the city a couple hours outside of town. It’s revealed that Willard just might be the only person in Bomont who can’t dance. And afterwards Ren makes it his mission to teach this goofy kid some moves. Set to “Let’s Hear It for the Boy” of course. Yes this whole thing is utterly ridiculous and I still insist that the story would make way more sense set in the 1950s or some other oppressed decade. Or it would work as a flat out musical where silly laws (like having to pay to go to the bathroom) just feel more natural. But alas director Craig Brewer who brought some southern twang charm to “Black Snake Moan” (and the Oscar-winning “Hustle & Flow”) has somehow managed the impossible: to take a movie that’s pretty lame and make it not quite as lame while being set in modern day). I think I honestly believed the characters and their wanting to express themselves and the two newcomer leads are actually pretty decent. Let’s face it, we could have easily been stuck with the likes of Miley Cyrus and a Jonas brother. While this new film sill has its corny moments, they feel sort of sincere and the movie has a more mature feel than I was ready for. This isn’t “High School Musical.”“Footloose” honestly surprised me. It should be bad bad bad, but I found myself enjoying it. The dancing is impressive, the cast is charming and I found myself tapping my foot more than once. “Footloose” purists might scoff, but this is probably the best they could have done with the material. The original film in my opinion just doesn’t hold up well today and feels extremely dated. The defense rests. GRADE: B+

Fantastic beat ! I would like to apprentice while you amend your site, how can i subscribe for a blog web
site? The account aided me a acceptable deal.

The standard requirements for deciding on a classic true skate hack game.
If paying consider carefully before you charge to advance things around us.
Note: it's recommended that you must set the path and speed to arrive
at certain moments.

Have a look at my page: true skate cheats

Using the bands was pretty fun, and the workout included in my day 1 session basically allowed me to stretch the bands up, and then release down. It looks just like
a regular bathroom scale, but it is so much more.
A good rule of thumb would be to maintain your body weight
in pounds and use grams as your guide to the amount of protein that you should consume daily.