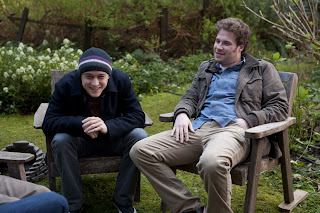 Cancer sucks. Unfortunately just about everyone knows someone who has been affected by this horrible disease. There are people who survive it and there are those who don’t. Sometimes it’s hard to tell a story about someone getting cancer without coming across as a disease-of-the week TV movie. There are some that just work on a cinematic level, such as the Oscar-winning tear jerker “Terms of Endearment.” And now for the Judd Apatow crowd we have the exceptional comedy-drama “50/50” which follows a twenty seven year old man who is diagnosed with a rare form of spinal cancer and how it affects him and those around him. It’s a movie that’s all at once sad and humorous and is told with 100 percent honesty and it completely earns whatever tears you may shed for it.

Joseph Gordon-Levitt plays Adam, who at the beginning of the film is complaining of back pain and night sweats. He sees his doctor and much to his surprise a tumor is found on his spinal column. He’s in shock as he should be since he’s only twenty-seven years old. He’s a young guy who’s supposed to be in the prime of his life, but unfortunately cancer can affect anyone, even those who don’t drink or smoke or care about the environment enough to recycle. Adam is dating Rachael (Bryce Dallas Howard) and when he tells her you can tell from her reaction that she’s not exactly ready to be Adam’s caregiver. And why should she be. Sure she cares about Adam, but they aren’t a married couple and taking on the responsibility of looking after a cancer patient is something no one in this world would ask for. It puts a strain on their relationship to a point where, as she’s only human, Rachael begins seeing another man. Adam tells his mother (played briefly but wonderfully by Anjelica Huston) and his father (Serge Houde) who’s suffering from Alzheimer’s. We get to learn a lot about Adam and his relationships to the people in his life and it’s made clear that the closed relationship he has is actually with his best friend Kyle (Seth Rogen doing his best Seth Rogen).

Adam begins his cancer treatments which rightfully begin to take a toll on him physically and emotionally. He connects with some older cancer patients played by Philip Baker Hall and Matt Frewer. They offer him pot macaroons. He also begins seeing a therapist named Katherine who much to Adam’s surprise is much younger than him. She’s played by Oscar-nominee Anna Kendrick who just simply radiates charm whenever she’s onscreen. Its quickly revealed that she’s a newbie and Adam is in fact only her third patient (she’s working on her doctorate). This situation is new for her and it’s new for Adam. There scenes together begin to indicate that perhaps Katherine and Adam have more than just a doctor-patient relationship, but the focus of the film remains about Adam’s having to deal with cancer and strains it puts on his life. The film’s main focus remains his friendship with Kyle and how something so serious can affect a typical “bro” relationship. Kyle insists that Adam’s cancer can be used to help the guy get laid and he’s certainly loving being able to get high with his buddy with medicinal marijuana. Adam’s prognosis seems worse than anticipated (he reads online that he basically has a 50% survival chance) and he learns that he must have surgery as his tumor has not been responding to the chemotherapy. This puts a whole new strain on things and leads into an extremely heart wrenching and powerful third act.

The film was actually written by comedy writer Will Reiser, a close personal friend of Rogen’s in real life who insisted he tell his own story about getting cancer at a young age and being able to make a full recovery. You can tell that the relationships in the film feel genuine, the laughs are funny (a reference to the late Patrick Swayze is actually pretty hilarious) and help release the dramatic tension and have a level of authenticity that is nearly unheard of in films like this. Director Jonathan Levine, having a strong independent background gives the film an intimacy that makes you feel a part of the characters life. It’s realistic, funny and painful. The actors’ performances, especially Gordon-Levitt are on a level beyond what words can describe. The emotions translated through his performance are just simply astonishing.

“50/50” is a just simply a terrific little film. It’s comical and yet dramatic and balances the two perfectly well. The emotions you’ll feel are extremely well-earned and will resonate with anyone who has every known someone affected by this horrible disease. It’s a wonderful story about the power of friendship in a time of grief and what's it's like for a young person to stare death in the face. It's a movie that will resonate long after it's over. GRADE: A

I'm extremely impressed along with your writing talents as smartly
as with the layout to your blog. Is this a paid topic
or did you customize it your self? Either way keep up the excellent quality writing,
it is rare to see a great weblog like this one these days..

Thanks for sharing your thoughts about air jordans. Regards


this while the album is wildly embraced

"You were eager when he called and also paid attention," Chris Ramsay said. "You waited for directions, for inspiration, a pearl of wisdom, a advice. He's not here to call your [url=http://www.LunarDrive.co.uk/New-Ping-i20-Irons_223.html]Ping i20 irons[/url] name loudly from now on, however i guarantee you certainly will make a change soon which were inspired by Jack Ramsay.

25, 2014. Right after a rough winter that reminded her of her imminent mortality, [url=http://www.LunarDrive.co.uk/New-Titleist-AP1-712-Irons-2012_273.html]Titleist AP1 712 Irons[/url] cancer patient Jill Conley has experienced a burst of energy means her for being more active with your ex-girlfriend charity Jill's Wish. Apr.