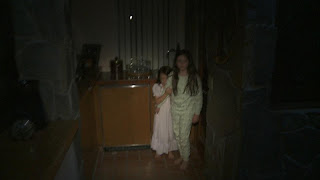 Sometimes the third part of a horror franchise is great (here’s looking at you “Dream Warriors”) and sometimes it can be just bad (“Halloween III” anyone?). Ok they’re mostly just bad. Scary or not, the third entry always begins to show some signs of fatigue and an overwhelming sense of “been there done that.” That’s mostly true with the latest shot-on-video-cause-we-love-reality-TV scary movie “Paranormal Activity 3.” Here’s the bottom line, right up front: this movie sort of has a “we’ve seen this stuff before” vibe but it still remains a pretty tense experience. It’s not exactly as outright nightmare inducing as the first entry, but it still maintains a superior level of suspense amongst the freaky ghostly goings on. And in fact, it does a great job of expanding on the story and characters established in the first two entries.

In the first film a young couple is being tormented by a spirit. Katie and her boyfriend Micah set up cameras to capture the paranormal phenomenon. In the end Katie becomes possessed and kills her boyfriend. In the second film, which is actually a prequel, we’re introduced to Katie’s sister Kristi. Apparently both girls had a run in with a spirit when they were children and this time the ghost seems to be after Kristi and her newborn son. Now in this new entry we flash back via VHS to 1988 when Katie and Kristi are young girls. Katie is played by Chloe Csengery. Kristi is played by Jessica Tyler Brown. Both girls turn in marvelous performances. You don’t see them acting because they’re disturbingly realistic. They’re so good in fact I’m wondering whether they knew they were going to be in a movie at all. Kristi and Katie’s mom is Julie (Lauren Bittner) and she’s now married to wedding videographer Dennis (Christopher Nicholas Smith).

The family notices a few strange noises and Dennis decides to set up some of his video equipment to see what exactly is going on. The film wastes no time getting to the creepy stuff as we almost instantly begin to see signs of very weird activity. Some evidence is so obviously paranormal that you wonder why Dennis and Julie don’t grab the girls and get the heck out of the house right away. There are creepy moments with a babysitter, and Dennis’ camera buddy that all point to “this house is definitely haunted.” Dennis pushes on and even though there’s plenty reasons to suggest something unworldly (such as young Kristi having full on conversations with a presence named Toby that can’t be seen) they stick it out. And a game of Bloody Mary doesn’t exactly end well. It’s sort of made unclear but it seems that Dennis literally wants to see a demon walk across the TV before he’ll do anything. Eventually they can’t take it anymore and go to stay at Julie’s mother’s house, which, without giving too much away, ends up being the worst idea of all.

The movie employs the same scare techniques as the first two films. We get steady shots of the couple and children sleeping and then scary things begin to happen. Dennis even rigs a camera to an oscillating fan that pans back and forth, which is used rather effectively in several scenes. There were parts in this film where I was pretty scared, but not outright terrified. And the audience seemed to be having a good time. Besides now it’s obvious that when you see a “Paranormal Activity” movie you pretty much know what you’re getting and that’s enough for me. The film does give another layer to a growing mythology with these characters and it’s pretty fascinating what screenwriter Christopher Landon has came up with. It’s obvious that he’s more influenced by “Rosemary’s Baby” than just some gore fest. The film was directed by the two guys (Henry Joost & Ariel Schulman) who were responsible for the “is it real or not?” documentary “Catfish” and they certainly lend a realistic hand to the third entry of this surprisingly good trilogy.

If you enjoyed the first two films, you’re more than likely going to like this one as well. Maybe you won’t jump as much as you did with the other films and the scares won’t keep you up at night, but this is a scary movie franchise that relies on good old fashioned foreboding tension and atmosphere to create fear, not blood and guts (not that there’s anything wrong with that). After having to endure seven “Saw” flicks, the new “Paranormal Activity” franchise is certainly a breath of ghostly fresh air. GRADE: B

I'm Victoria Terrazas. Filing is things i do in her youth but I've already sent applications for another one.

The favorite hobby for the children and me is to play crochet
therefore i would never give upward. For years I've lived in South Carolina and my family
loves this situation. You can find my website here: Mia Airport Parking