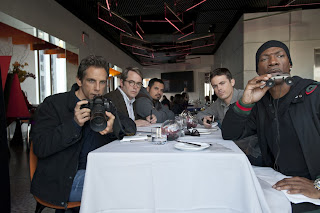 It should be noted that “Tower Heist” is not “Ocean’s Eleven” (although it’s way better than Twelve and Thirteen if you’re keeping track). The suave charm of Clooney, Pitt and Damon here are replaced by Ben Stiller, Matthew Broderick and Eddie Murphy. And yet Brett Ratner, apparently the worst thing to happen to the film industry since television was invented, manages to keep thing lively, fresh and just plain fun. The important thing to note is that even though Mr. Ratner has helmed the film, the script was written by comedy caper extraordinaires Ted Griffin (Ocean’s Eleven, Matchstick Men) and Jeff Nathanson (Catch Me If You Can). The script and the cast is the real winner here as “Tower Heist” proves to be an entertaining yarn about decent, regular people who are fed up with white collar crime. Who wouldn’t root for these guys?

Ben Stiller is Josh Kovacs the manager of a fancy Columbus Circle high-rise building known as “The Tower.” The building’s owner is Arthur Shaw (Alan Alda). The two seem to have a nice boss-employee relationship as part of Josh’s daily tasks include making sure Mr. Shaw has the right type of cheese to go with his wine. The building is home to the rich and fancy and the workers are the typical blue-collar types. The new elevator operator is Enrique (Michael Peña), the concierge is Charlie (Casey Affleck), Odessa is a rotund Jamaican maid (Gabourey Sidibe) and the friendly doorman is Lester (Stephen Henderson). Things seem to be going well in The Tower, but soon Shaw is arrested on multiple counts of white collar crimes such as fraud. He maintains his innocence which Josh wants to believe, but then it turns out the entire staff’s pensions have been invested by Shaw and now it’s gone. All gone. There’s nothing left for Josh to do but hire the neighborhood crook (and a childhood friend) named Slide (Eddie Murphy “returning to form”) to storm Shaw’s penthouse and steal the millions of dollars that is supposedly hidden there.

It’s great how the film doesn’t just delve completely into the heist part of the story right away. It takes its time trying to develop the characters first and actually allows enough time to buy the fact that Josh and his buddies are willing to actually become criminals just to get their savings back. It’s obvious that these guys are not thieves. In one great sequence Slide makes Josh, Enrique, Charlie, and Mr. Fitzgerald (a down on his luck former tenant who’s been squatting in The Tower played by Matthew Broderick), steal fifty dollars worth of merchandise from the mall. I guess it proves that anyone could be a criminal, but sometimes it’s fun to root for the little guy, even if he’s just ripping of Victoria’s Secret. Meanwhile, Claire (Téa Leoni, where has she been??), an FBI agent who’s in charge of Shaw’s arrest, becomes interested in Josh and she has her own quirky personality: she’s the one that no-so-subtly gives Josh the whole idea to “storm Shaw’s castle.”

“Tower Heist” for the most part seems believable until things begin to get slightly crazy in the third act, which seemed rather hard to swallow, but you have such a fun time watching everything come together that by then it doesn’t really matter. The film works mostly because it’s established early on that these are people you want to root for. And the film couldn’t arrive in theaters at a more convenient time. With tall that “Occupy Wall Street” stuff going on, who wouldn’t want to rob a rich dude’s penthouse?

Don’t let the fact that Brett Ratner (who is not nearly as bad as he’s made out to be in my humble opinion) directed this thing fool you. It’s a fun, breezy movie with funny performances and an appealing story. It works mostly due to its great cast and they all work surprisingly well together. Broderick, Murphy and Stiller are all wonderful together it almost makes you wonder why they hadn’t been in anything together before this. “Tower Heist” is pretty much the definition of escapist, fun movie going. It’s not stupid enough that you have to turn off your brain, but it’s not trying to be anything more important that it actually is. It certainly won’t rob you of your time. GRADE: B+

Good day! I could have sworn I've been to this site before but after reading through some
of the post I realized it's new to me. Nonetheless,
I'm definitely delighted I found it and I'll be book-marking and checking back often!

This is because this sort of substances relaxes your language and throat muscles a great deal
that they just can not hold themselves in their natural position at night.
similar object can be sewn into the back of a night shirt.
As problems in the respiratory network of the sufferer are usually to blame for
snoring, it is best to check there first.

will always be the first to have the episode so please Bookmark our site Pinoy TV Replay. And add us on Facebook for update Tv Shows!!! Enjoy. ABS CBN Network all Tv shows updated here on this page.

Watch All Pinoy tv Shows Video. Thousands of people from Philipines and the rest of the world watch Pinoy Lambingan Tv Replay online.

This paved the way for another transformation. In Sanskrit plays, the verse stanzas were not sung; they were only recited. Bigg Boss 14

which recent research has established beyond doubt,Bigg Boss 14 prove that they are as integrally related to the culture of the elites as Kalidasa was to the aristocratic stratum of the Gupta empire.

Thanks Admin For This App And Information Kinemaster Mod APK

Hey, thank you a lot for sharing this article with us. I can’t say, how grateful we are to read this. Also, I would love to check out other articles.
Thanks for sharing this valuable piece of information. Keep sharing more such awesome articles in the future. Goodbye!
Samsung-Galaxy-m33
poco-m4-pro
Redmi-note-11pro

Android application PacKage called APK An application file ready for installation in an
Android device. The compressed APK file, which is a ZIP archive in the JAR format