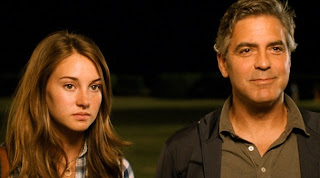 Alexander Payne is an expert in extracting comedy in awkward and dramatic situations. He has told stories that take place in high school and vineyards. In his latest film “The Descendants” he takes us to Hawaii to tell us a story about a middle-aged man who’s dealing with his wife tragic boating accident. She’s in a coma and now he’s forced to deal with the possibility of raising his two daughters by himself. This man is Matt King and he’s brought to life by the always reliable George Clooney. Matt soon learns a secret about his wife that forever changes his relationship with her, but she’s in a coma and there’s nothing that can really be done. A movie about a woman in a coma sounds rather maudlin and doesn’t seem ripe for comedy, but Payne manages a few great laugh-out-loud moments. Unfortunately, these laughs don’t come nearly as frequently as they should, and therefore I was left wanting more from a director I know is usually pretty reliable.

The thing with Alexander Payne is though, sometimes his movies tend to feel rather slow. There’s never really anything that interesting visually, which is fine when you have an interesting story and fascinating characters. And that was the main problem I had with his previous effort “Sideways.” I didn’t like those characters and I don’t really know much about wine, so to me I felt rather disconnected. “The Descendants” is much improved and what I did like most about it was how much you get a sense of Matt’s wife Elizabeth (played by Patricia Hastie) even though she spends the entire movie in a coma. The script (co written by Payne and Nate Faxon and Jim Rash) is rich with character development and what I liked most about the story was Matt’s relationship with his two daughters.

Shailene Woodley plays Alexandra King Matt’s rebellious teenage daughter, and she gives a surprisingly strong performance for an actress her age (she just turned 20). Having to deal with her mother’ accident and her wishy washy father is hard on her. Sometimes she’s left to look after her younger sister Scottie (Amara Miller in her feature debut) who’s rather rebellious herself. Scottie likes throwing the lawn furniture in the pool for no clear reason except that it’s just something to do. Alexandra also amusingly insists on dragging around her surfer dude guy friend around played by Nick Krause; let’s just say he doesn’t get along with Alexandra’s grandfather.

Matt soon learns a secret about his wife from Alexandra: Elizabeth had been having an affair and was planning on leaving him. This throws a much needed comic spin on a truly dire situation. Matt’s best friends, a couple played by Rob Hubel and Mary Birdsong, have known about this and tells him about the man she’s been seeing. He’s played by Matthew Lillard, who probably has his best role since the original “Scream” from 1996.

“The Descendants” is really about the journey of a man who has to deal with a situation that no one really wants to face. He wanted to be a better husband and he wants to tell his wife, but he can’t. And it seems like her prognosis is not good. It’s important to know that the people we love won’t be around forever and we don’t usually get a second chance. The Hawaiian setting works because, like Matt’s opening narration reminds us, this island community isn’t always just paradise. Sure there are sandy beaches and beautiful locations. But it’s still a place where bad things happen. No one here in “paradise” is immune to the pains of life. And I think that’s where the film lost me: I don’t think the movie’s quite as funny as it could have been. The film would rather be a drama with a few moments of comedy, but those few moments almost feel out of place in such a dramatic setting.

“The Descendants” features great performances and a richly developed script, but I found the opportunity for humor rather lacking. The film feels too slow and dramatic to be truly funny. Payne knows how to make dramatic situations funny, but I think something about the way he handled the film’s story left me wanting a little bit more. It’s a film that I’m sure the Academy will surely eat right up, but for me maybe a second viewing will be required. I think I just might have missed something along the way. GRADE: B-

There are times when you suffer the disease being treated immediately, before things got worse. Thank you for the information:)