Time Bandits: The Stylish and Fun “In Time” is Certainly Worth Your Time 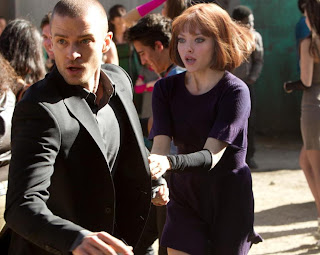 Finally we have a wonderfully original film that isn’t based on a book or another movie, or a sequel or even a true story. Heck, it’s not even based on a short story. It’s got to be the work of one Andrew Niccol, a talented filmmaker who constantly churns out highly original works every single time he steps behind the camera. “In Time” takes place in a Philip K. Dickian dystopian future where the currency of dollars has been replaced by time. Right, overpopulation has lead to humanity coming up with a concept that humans are genetically modified to stop aging at 25. If you want to live longer, you must work for additional time. If you want a cup of coffee, instead of paying a few bucks, you pay with a few minutes. Everyone’s time appears as a green digital countdown on their forearm. Once the numbers count down to zero, you “clock out” aka you die instantly. There are those poor individuals who work all day just to gain a few extra hours of life, while those who are rich have decades and decades of time. In essence you can live forever, unless you get reckless and you die by other means – or if someone kills you of course. It’s a wildly fascinating concept that gets immediate praise for this great idea alone.

We’re introduced to Will (Justin Timberlake). His mother Rachel is played by Oliva Wilde. You may notice that Wilde looks no older than say 28. And that’s because she is. While technically her character is about 50, no one in this movie ages past 25, which makes this film ideally a film filled with attractive actors in their mid twenties. Those who are able to get more time will have that amount of time, but their body will no longer age. Of course Rachel and her son are poor, living in a ghetto “time zone” called Dayton. Rachel only has a few hours left to live. While at a bar with a friend that evening Will comes across a 105-year-old “billionaire” named Henry Hamilton who flaunts the fact that he has over 100 years left on his clock to the poor bar patrons. Henry is played by Matt Bomer (and his piercing baby blues). Henry is accosted by a gangster named Fortis (Alex Pettyfer) who wants to steal his time, but Will saves him and brings him to an abandoned warehouse where he confesses that he’s tired of living and would rather just “expire.” He transfers the rest of his time to Will while he sleeps and then commits suicide. The police force known as the Timekeepers believe Will is responsible for Henry’s death. Timekeeper Raymond Leon (Cillian Murphy) is hot on Will’s trail, who decides to use all of new time to infiltrate the rich folks over in the New Greenwich Time Zone and hopefully help redistribute all the their hoarded time.

That’s a lot to process for a fun action thriller staring the former lead singer of N Sync. Somehow this high concept really works well. It’s simply fascinating to see how one person can “transfer” their time to another by simply grabbing onto the other person’s wrist. While in the rich high society Will comes across a young woman named Sylvia (Amanda Seyfried) who seem to be into each other, and he ends up taking her hostage to that her rich daddy played by a creepy Vincent Kartheiser (doing a terrific job playing an 80-year-old in a 25-year-old’s body). The two are soon on the lame as both Leon and Fortis are after them and their time. There are several suspenseful sequences in which the characters literally have minutes or seconds left to live and we watch as they scramble to find more time – including pawning off Sylvia’s diamond earrings for a meager two days of time. And no character is really safe in this movie as anyone’s clock could tick down to zero at any moment.

Andrew Niccol proves to be a wondrous storyteller having delivered some very intriguing screenplays like The Truman Show and Gattaca. He’s even proven himself to be somewhat of a auteur behind the camera as well, as each of his films have a distinct visual style. They’re always so meticulously art directed and appropriately colorful. I loved Roger Deakin’s photography (his first digitally shot film) and beautiful use of shadows and silhouettes. Here Niccol is able to make a dystopian future without hardly any use of computer effects. There’s no need to have sweeping shots of CGI buildings or flying cars, when cars that drive on the ground will do. Heck, people even use payphones in this society. And his films always have such a stylish and lavish feel; it sort of feels like a futuristic James Bond spy thriller with a touch of “Bonnie & Clyde” thrown in. It’s just soft of, cool.

“In Time” is a highly original and chic motion picture that brings up some pretty interesting issues about class warfare and about society in general. And it’s all packaged in the style of a futuristic thriller. It features great performances – like it or not Justin Timberlake has acting talent – and such an interesting premise that it’s certainly not a waste of your time. GRADE: B+

Whether its Patek Philippe, Rolex or breitling replica added brands, their new accepted models are do altered and acquired from replica rolex their best pieces we see a absolute retreat to the best market. There are beneath and beneath of these abundant best pieces that abide in aberrant condition and those absolutely aberrant pieces will alone abide to acknowledge over time, said Reginald Brack, chief carnality admiral and swiss replica watches all-embracing arch of retail for watches at Christie's in an April, 2015 Cigar Aficionado annual feature.