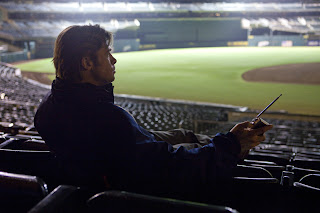 “Moneyball” is a great movie. And I know why. It achieves something only great movies can: it turns a subject that I’m not interesting in and makes it fascinating. Baseball fans, and sports fans in general, will like “Moneyball” because it’s about a subject that interests them. I’m not a sports nut and yet I found “Moneyball” to be an engrossing, moving, smart and well-made film that solidly hit every base a good movie should. It sort of felt like “Jerry Maguire” but without that dopey love stuff.Filmmaker Bennett Miller’s last directorial effort (which was his first if you’re keeping track) was the Oscar-nominated “Capote” which netted him a direction nomination (and star Philip Seymour Hoffman an Academy Award). That was a biopic that was fascinating because it was about an eccentric character. Here we get the true story of Billy Beane who was a Major League baseball player who eventually ended up as general manager of the Oakland Athletics (the A’s for short). He was arguably a much more successful manager than ballplayer. How do you make your movie’s main character instantly likeable? You case Brad Pitt, who gives a subtle but nuanced and extremely good performance as Beane, a man who is determined to turn his team around.

The film begins with the A’s losing to the Yankees in the postseason in 2001. The majority of their star players have been traded to better teams. And they have an extremely low budget. Beane cannot afford to spend millions of dollars getting top baseball talent on his team. A trip to Cleveland lands a chance meeting with a young Yale graduate named Peter Brand (Jonah Hill). Brand is a based on a real guy, but his name is not Peter Brand. Brand was an Economics major and he has a sort of unorthodox way of drafting players in that he focuses on players ability to get on base. He doesn’t look at the traditional things that scouts and managers generally look for. He has some kind of fancy mathematical equation that you and I cannot understand, but it makes sense to someone who majored in Economics at Yale. Beane, who I truly believe was at his wits end hires Brand and wants him to use his magical mathematics to make the A’s a strong team. He does so but recruiting players that no other team really wants including a pitcher who “pitches funny” and a guy let guy from the Red Sox who couldn’t really throw a ball because of an injury. This new strange method of recruitment is met with appropriate reluctantly from the other managers and scouts Beane works with. Beane truly wants to believe that this is going to work.

Anyone who knows a lot about baseball and this team in general knows the whole story. But there are people out there who don’t know this story. Myself included. And I found it simply fascinating. It’s usually difficult for me to root for a sports team mostly because to me I don’t really see what the big deal is. It’s just a bunch of guys playing a game. Why should I care whether a team wins or loses? It’s hard to become emotionally involved in sports, but it’s a lot easier to become emotionally involved in a film. And that’s where the movie succeeds. Pitt and Hill are great at getting viewers to care about them. Pitt is so determined that he’s a substitution for any time in our lives we’ve wanted to succeed so badly. Miller, working with a screenplay from Steven Zaillian and Aaron Sorkin wisely intercuts moments from Beane’s past as a young college baseball star having to make a tough decision: go to Stamford on a full scholarship or sign a deal to play for the New York Mets. Towards the end of the film Beane has to make a similar decision and we’re on pins and needles the whole time.

“Moneyball” is a sports movie for people who don’t really like sports movies. Maybe I liked it because it was as much about math as it was about baseball. Sports fans will love it yeah, but it’s wisely made with the non-fan in mind. It doesn’t use fancy lingo we don’t understand (the way Sorkin’s script for The Social Network did) and it presents us with characters worth caring about. I particularly enjoyed Chris Pratt’s portrayal of Scott Hattenberg. And while the film isn’t all that particularly flashy it includes some great work from cinematographer Wally Pfister. “Moneyball” is a winner through and through. GRADE: A-

Using ingenious technology and innovation the Romans made an Empire that withstood the test of your energy.

So unless any organization completes the formalities and discover the necessary certifications they are able to't start their business.
A well-developed business plan is similar to your blueprint for victory.

Thank you for sharing an interesting and very useful article. And let me share an article about health here I believe this is useful. Thank you :)

Thank you for joining us. his article is very helpful