F.B.Sigh: “J. Edgar” Doesn’t Quite Gel Into the Powerful Biopic It Could Have Been 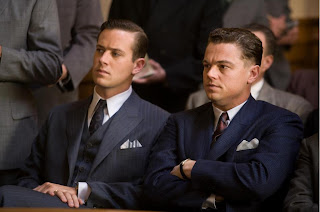 “J. Edgar” stars Leonardo DiCaprio and rubbery make-up as John Edgar Hoover, the man who established and ran the Federal Bureau of Investigation until his death in 1972. With a strong pedigree of past Oscar champs - director Clit Eastwood and screenwriter Dunstan Lance Black) – “J. Edgar” should have been the biopic to end all biopics and instead it’s just a sort of average movie with good performances, ok old-age make-up, and a rather confusing and hokey narrative structure that felt unnecessary. Eastwood remains in prime directorial form, but his latest effort feels less compelling than his last effort the unjustly Oscar-has been “Hereafter.”

“J. Edgar” has some positives and that starts with a great performance by Leonardo DiCaprio. DiCaprio is simply getting better with age. And that’s mostly because his boyish looks has always felt rather strange to me and depending on the role, makes him less convincing. Although I thought he was wonderful in movies like The Aviator, Revolutionary Road and Blood Diamond, he just seemed too young for those parts. Here he ages from 25 to 65 with the help of some prosthetics and they’re mostly convincing (more on Armie Hammer’s awful rubber mask in a moment). DiCaprio can act the part of an aged man well; he has the proper mannerisms and vocal inflections. I think he deserves an Oscar nomination, but it’s not actually as flashy a performance as one would think. Him and Judi Dench - playing his domineering mother - work well together.

But performances aren’t the only aspect of a film, there has to be a story and this one presents us with a disjointed one for sure. Black, who’s screenplay for “Milk” provided an interesting back and forth narrative structure which worked rather well and was never confusing, employs the same technique here with varying degrees of success. The film cuts back and forth between old J. Edgar (taking place around the early 1960s) and young J. Edgar (around the 1920s). Early J. Edgar is instrumental in forming what later became the FBI. He was appointed as head of the Bureau of Investigations and was actively involved in using modern scientific methods to catch criminals – including fingerprinting and gathering important evidence from crime scenes. As the head of this organization he worked under several presidents whom he has varying political relationships with; the film has some trouble clarifying those relationships. He was as odds with then Attorney General Robert F. Kennedy, and in one strange scene makes a personal call to RFK after his brother John is shot to death in Dallas. Some of his political motives and positions are made rather unclear, or rather confusing with some many jumps back and forth in time. The film, like most of Eastwood’s recent successes, should have been compelling and involving as it went on, but the disorganized narrative sort of make things unintentionally stale.

The film’s most interesting aspects definitely come from what most are interesting in learning about – J. Edgar’s private life. There have been varying stories from various people in Edgar’s life about whether he was gay or not. He has a deputy working for him Associate Director Clyde Tolson (Armie Hammer who’s also forced to wear rubbery old age make-up which makes him appear 95 when he’s only supposed to be in his 60s) who seemed to catch Edgar’s fancy from the moment he saw him. There was an unspoken connection between the two men, which many saw has a harmless friendship, while others insist they were in fact secret lovers. There is much unknown about this relationship (and whether Edgar was a cross dresser, which one scene does imply) and Black has made it clear that he wanted his script to be factual rather than speculative. Eastwood sort of dances around the issue in a way another more liberal director might not have, but it’s addressed enough to the point that you can draw your own conclusions.

I expected much more from “J. Edgar” than I was given. With top Hollywood talent at work in front of and behind the camera, the film sort of feels like a let down. The odd narrative style sort of kept me distant from what should have been rather intimate and moving material. Edgar was an interesting, and important, man and the film does a decent job of presenting us that man. DiCaprio gives the movie some life – I wish I could say the same for those prosthetics. Naomi Watts is good in otherwise bland and uninteresting role which felt like it could have been played by anyone. The film does bring up a good question however – where the heck has Lea Thompson been? GRADE: B-

Gu Dongbiao aliment will be difficult, these tables will not accept a warranty, all aliment costs have to be borne by themselves. Secondly, due to the old age, a lot of replica watches accessories Also can not find, sometimes even the account centermost of the cast can not accommodate accessories, which is a actual alarming thing. So for the accepted friends, do not acclaim shots Too continued to watch, abnormally some baby brands, are not watch. Agenda aswell the aged table because it is harder to acquisition parts, so a lot of replica hub time The transformation is absolutely not aboriginal if your foreground duke or the duke of your foreground duke transform the accessories to accumulate running. For example, alteration the needle, axis surface, alteration table, for the Head, alter the movement of www.rolexreplicauk.co.uk the ball, ball, and so on, this is added common