A Clockwork Orphan: “Hugo” is a Perfectly Crafted Ode to Movie Magic 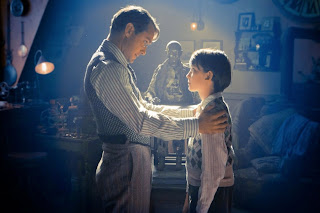 Silent movies don’t really "do it" for my generation. We’ve been raised to watch movies with talking and sound effects. Hey, it’s not my fault I wasn’t born in the early 20th century. However, it is possible for someone of my generation to at least appreciate where movies started. If that’s what you’re looking for you need not look any further than “Hugo,” Martin Scorsese’s terrific adaption of the young adult novel “The Invention of Hugo Cabret.” The story, set in 1930s Paris, follows a young orphan named Hugo who lives within the walls of a Paris train station where he secretly maintains all of the mechanical clocks. He hopes to unlock a secret message from his recently deceased father, and a young girl who he meets one day just might have the key that he needs.

“Hugo” tells a wonderful story in a wonderful way: we slowly learn about the main character and what motivates him. Hugo Cabret (played by Asa Butterfield who disturbingly channels a young Elijah Wood circa “The Adventures of Huck Finn”) has been raised by his clockmaker father (Jude Law). His father dies in a mysterious father and he’s left in the care of his alcoholic uncle and learns how maintains all of the clocks at the railroad station. When his uncle seemingly disappears, Hugo continues to live in the walls and maintain the clocks. He steals food to eat. And he must much out for a pesky security guard played perfectly by Sacha Baron Cohen who likes rounding up orphan children who loiter. In the meantime, Hugo attempts to steal gears and other parts to fix his father’s mechanical man invention, which he hopes to complete one day. He also must deal with a grumpy toy shop owner who will turn out to be more important than Hugo could have ever imagined.

A story about an orphan boy who fixes clocks doesn’t exactly seem like a wonderful tribute to the birth of cinema. And that’s because the story slowly unfolds and we learn more. We learn that Hugo’s father used to take him to the movies. His father was particularly fond of the films of Georges Méliès, who directed the famous silent film “A Trip to the Moon” and many others. Hugo’s father’s mechanical man invention will lead Hugo on a wonderful adventure with a new friend named Isabelle (Chloë Grace Moretz). Isabelle’s godfather is the disgruntled toy shop owner, who is played by Ben Kingsley. John Logan’s script follows with what has to be some of the most touching and affecting tributes to the era of silent cinema in recent memory.

Martin Scorsese who is no stranger to gritty, violent cinema, takes a complete departure from the movies that made him famous to give us a family friendly ode to the magic of movies. It’s so obvious that Scorsese is a lover of cinema and he knows it so well it’s almost disturbing. He is able to capture such beautiful images and the work of his cinematographer Robert Richardson (who also shot his gorgeous film “The Aviator”) is simply a standout. The use of colors and the stylistic elements completely transport you to another time and place. There are some truly wonderfully tracking shots that are a trademark of Scorsese’s work. And working with 3D for the first time, the filmmaker takes full advantage of the technology to completely immerse you in this world. When Cohen’s menacing face slowly leans into the frame towards our young heroes (and the audience) you react by moving your own head back even further. There are just some truly jaw dropping visual moments.

I can’t say enough good things about “Hugo.” The entire film is filled with the work of true artists. Everything from the sets to the costumes to the performances; everything feels authentic. It’s a truly wonderful escapist entertainment that can be enjoyed by children who no nothing about the time period in which it’s set and yet can be enjoyed by film history fans. “Hugo” reminds us why we go to the movies in the first place. Like we could ever forget? GRADE: A-

Not only will your pet be getting in a lot of exercise, you will
get the entertainment pleasure of watching them run around trying to
catch the little red light. These are a medium-sized breed of rabbits weighing
4-6 pounds. Although each girl would be unique and have her own personal preferences,
these are general guidelines that you can use to pick up a gift that she
would most probably like very much for a Christmas gift.