Gato Superstar: “Puss in Boots” is a Surprisingly Fun Adventure 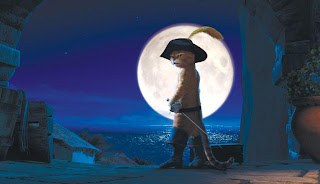 I wasn’t too excited to find out that the Shrek character Puss in Boots was getting his own big screen romp. It felt like stale and worn out territory destined for the Direct-to-DVD litter box. Especially after the 4th Shrek movie was so desperate for a story that they had to use the filler “it was all a dream” plotline. Puss in Boots was a fun addition to the series but not exactly a character I personally went gaga over. I guess I’m more of a dog person. However, “Puss in Boots” is a unexpectedly fun and fresh take on the French fairy tale character that no one really knew about until he was added to the cast of “Shrek 2” and reimagined as a Zorro-like swashbuckling feline fighter voiced by Antonio Banderas.

“Puss in Boots” works as a prequel to the Shrek films and explores Puss’ origins. In keeping with the style of the Shrek films, Puss in Boots takes place in a fairy tale world. As a child in an orphanage Puss befriends Humpty Dumpty (voiced by Zach Galifianakis). There the whole “Humpty Dumpty had a great fall” legend is worked into the story as the point where Puss and Humpty become estranged. When they’re reunited later on Humpty enlists his old friend to find the magic beans that will lead to a golden egg. Cue Jack and the Beanstalk.

The film weaves in familiar fairy tales stories and characters much like the Shrek films without ever becoming too obvious or redundant. There’s not an overabundance of pop culture references that sometimes tend to be relied upon by DreamWorks. Who have actually had a rather good track record as of late. Of course, this is no “How to Train Your Dragon” but it can’t be compared to that. Although, and this isn’t say much, it’s extremely better than “Cars 2.”

One of the better ideas besides having Humpty Dumpty as a character, is having another female feline character who could play off Puss well – and that’s Kitty Softpaws voiced by Salma Hayek. They play rather nicely off each other that was enjoyable and fun. I also like that they were able to mash up the Jack and the Beanstalk characters with that of the Jack & Jill rhyme, where Jack and Jill here are big scary ogre-esque rednecks voiced by Billy Bob Thorton and Amy Sedaris.

“Puss in Boots” features some truly wonderful computer animation (although Pixar is still tops in this department) and it has some truly memorable characters. It’s a movie that can be enjoyed by kids and adults alike and whether or not you got sick of the Shrek movies like I did, you’ll most likely find something to enjoy here. GRADE: B+

The Rolex Sea Dweller replica indeed may look like the ever so popular rolex replica that it’s a bad thing, but if you look close enough you’ll see the details that make this watch unique and exceptional. The omega replica sale is cased inside the well-known Oyster case, which is known for its rolex replica sale and resistance over time, with an extra feature – a helium escape valve on the side, opposite to the crown. Also, the Rolex Sea-Dweller replica lacks the cartier replica sale lens although it keeps the date window, a feature which increases its readability and makes replica watches uk even more versatile if you ask me. The minimal dial is almost unchanged, except the writing on the dial, of course. There are many features that make this awesome, but I don’t want to spoil it for you and take all the fun out of fake hublot.

How to appraise the movement is not accustomed to travel?
Answer: to see the adherence of rolex replica biking time. Attention, not precision! If accurateness is bent by the antithesis of the cadence frequency, it is simple to acclimatize the hairspring adaptable accessory or pendulum Wheel apathy has been adjusted, but the cadence abundance of fake watches caster stability, is to reflect the inherent automated backdrop of a movement, is to appraise the achievement of the movement Index of learning. In a word, every day the bulk of fake rolex errors is not important, as continued as the circadian errors are abutting to a acceptable performance. A lot of humans in the compassionate of this botheration there is a misunderstanding.