No Strings Attached: The Magic is Back with the “The Muppets” 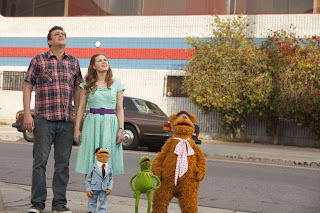 Has it really been twelve years? Everyone’s favorite felted friends are finally back on the big screen in the wonderful Muppet reboot appropriately titled “The Muppets.” Long-time Muppet fans Jason Segal and Nicholas Stoller (who both worked together on the hilarious “Forgetting Sarah Marshall”) have brought the magic of the Muppet characters back after a too long silver screen absence. All hope seemed lost after the so-so reception of “Muppets from Space” back in 1999 which explored the origins of the big-nosed chicken-loving Gonzo. That movie was alright but not up to par with the gang’s previous efforts; that movie’s cameos were reduced to D-list stars like Kathy Griffin and Hulk Hogan. “The Muppets” is definitely up to par with the best of the Muppet films. It might even be better than the original “The Muppet Movie.”

The film stars Jason Segal as Gary. He’s dating Mary (Amy Adams), but Mary sometimes feels neglected because of Gary’s close relationship with his brother Walter (Peter Finz). Walter is a new felted friend who is one of the Muppet’s biggest fans. He feels a closeness to the likes of Kermit, Miss Piggy and Gonzo, etc because he feels different. He lives in Smalltown, USA and his biggest dream is to tour the old Muppet Studios in Hollywood, California. So the trio takes a trip to California, where they learn that an evil oil tycoon played by Chris Cooper is planning on buying the studios so he can tear them down and dig for oil. You know he’s evil because he forces his Muppet minion to do a maniacal laugh. Their only hope is to reunite the Muppets, who have since disbanded, and have them raise money to save their old stopping grounds.

Anyone who is expecting Kermit and the gang to be onscreen from the start will be disappointed, but that’s not really a problem. Segal has come up with such a fun story about getting the gang back together that is really the only story that could possibly make sense following the Muppets’ long hiatus. Segal and Stoller have wisely created a very tongue-in-cheek story. You may even call it meta-Muppet. The film takes place in a world where “The Muppet Show” was an actual network program. But now in a world filled with stupid realty television, like the almost too real seeming “Punch Your Teacher,” the Muppets need all the help they can get to seem relevant again. A TV executive played by Rashida Jones reluctantly gives Kermit and the gang a chance to put on a show. They need a celebrity to help them out, so they kidnap Jack Black.

“The Muppets” maintains the spirit – and, most importantly, the strange quirkiness and comedy- of the previous Muppet films while finding its own way in a world where family entertainment is dominated by beautiful CGI creations. It’s amazing how well the puppeteers and voice actors make these pieces of felt and fur come to life and that’s because of the genius of Jim Henson. Even though he’s no longer around, it’s wonderful how the company he started is able to make such fun and memorable characters. Even after decades of entertaining the world, they’ve proven there is still a place for these fun-loving characters. There are even memorable musical numbers featuring songs written by Bret McKenzie of “Flight of the Conchords” fame. Director James Bobin couldn’t have asked for a more terrific feature directorial debut. He has worked the smart and sassy script into such a wonderful and joyous film filled with colors and music and magic you’d have to be Oscar the Grouch not to be moved by it all. GRADE: A

Hi there would you mind letting me know which webhost you're using?
I've loaded your blog in 3 different web browsers and I must say this blog
loads a lot faster then most. Can you suggest a good hosting provider
at a honest price? Thank you, I appreciate it!

I am curious to find out what blog platform you're using?
I'm experiencing some minor security issues with my
latest site and I would like to find something more safeguarded.
Do you have any recommendations?