The Tree of Strife: “A Very Harold & Kumar 3D Christmas” is Not the Holly Jolly Christmas Movie I Expected 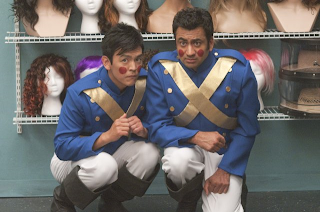 Wow it’s sad when a robot toy named Waffle-Bot barely saves your movie. That movie would be “A Very Harold & Kumar 3D Christmas.” Or maybe the movie should have been called “Harold & Kumar Need a Christmas Tree.” Cause that’s all it is. And you know what? That you used to be what was great about Harold and Kumar: the simplicity of the story and the unpredictable nonsense that came from it. In the first film best friends/stoners Harold (John Cho) and Kumar (Kal Penn) just wanted to eat at White Castle after getting high one evening. That led them on a hilarious adventure. Neal Patrick Harris even showed up playing wildly against type. They upped the craziness in part 2 when Harold & Kumar were mistaken as terrorists aboard an airplane and sent to Guantanamo Bay which lead to some hilarious misadventures as they made their way along the Southern US (and onto George W. Bush’s Texas estate). Now things are as gimmicky as ever (in glorious or should I say crummy-looking 3D) as Harold must find a Christmas tree to replace the one that Kumar accidentally burned down before Harold’s in-laws get back from midnight mass.

The problem with “A Very Harold & Kumar 3D Christmas” isn’t the fact that it’s utterly stupid (because the other two were as well). It’s that most of the jokes fall completely flat and instead were left with boring scene after another. It turns out that Harold and Kumar haven’t talked to each other in a long time ever since Harold settled down and got married. Kumar is still getting baked and his ex-girlfriend doesn’t really want anything to do with him. A mysterious package is left on his doorstep that’s addressed to Harold (who hasn’t lived there in a couple years) and so he decides to drop it off at his house. Harold’s wife’s family is visiting for the weekend and that includes his scary Christmas-obsessed father-in-law played by Danny Trejo (sporting a fine-looking Christmas sweater). He gives his daughter and son-in-law a Christmas tree he grew himself (took him eight years) and 10 minutes later Kumar unintentionally sets it on fire with a massive joint. Now it’s a race against time to find a new tree on Christmas Eve before his wife and her dad finds out.

This brief plot set-up leads to some rather disappointing endeavors which include stopping by Kumar’s friend Adrian’s online girlfriend’s house where he hopes to deflower her. Kumar and Harold must play a game of beer pong with a boy who says they can have his family’s tree if they win. Of course the kid’s father is a Russian mob boss which isn’t a good thing for Harold and Kumar. Harold’s friend Todd (Thomas Lennon) is also along for the ride with his infant daughter who manages to get high on weed and cocaine (and eventually ecstasy) all in the same movie.

But all that stuff is just filler until we wait for Neil Patrick Harris to show up (even though he was killed in the second movie) so that he can liven things up. He plays a funny riff on his widely known gay persona (which in the film is just an act so he can get more female tail). Harris is funny but he doesn’t quite save the movie. No, that job goes to a little fictional toy robot named Waffle-Bot. He’s the film’s hot selling Christmas toy. He makes fresh, delicious waffles and don’t get him started on how much he hates pancakes. He ends up saving Harold and Kumar and end up barely saving the film as well. A well-placed Waffle-Bot commercial featuring a boy getting electrocuted by his toaster is utterly hilarious in a movie that should have been filled with utterly hilarious moments, but alas I really only chuckled that one time.

Perhaps the writers Jon Hurwitz and Hayden Schlossberg who also penned the other two installments are just running out of ideas. And that’s not surprising since really how many gross-out misadventures can you give these characters? Director Todd Strauss-Schulson doesn’t really know what he’s doing either cause he’s made a pretty ugly film that looks miserable when looking through tinted 3D glasses. The 3D effects are fun and gimmicky which is how 3D should be used in a movie like this, but for such a fun and happy and jolly Christmas stoner movie things look so dank and dismal. I am a fan of Harold & Kumar but this third entry was a major disappointment. Here’s hoping that Harold and Kumar can at least have a more entertaining Martin Luther King Day. GRADE: C-

Howdy! This post couldn't be written much better! Going through this post reminds me of
my previous roommate! He constantly kept preaching about this.
I most certainly will forward this post to him. Pretty sure he'll have a great read.
Thank you for sharing!

When a individual car or truck is chosen by a person the program will exhibit which auto sections
have presently been marketed relating to the car or truck.
" Do keep receipts and bills of all expenses incurred in the accident to be presented to your insurer. Personal bankruptcy should be a last resort in debt management and debt consolidation.

My family members all the time say that I am killing my time here at web,
but I know I am getting experience every day by reading thes nice articles.

Tremendous issues here. I'm very glad to
look your article. Thank you so much and I am taking a look forward to touch
you. Will you please drop me a e-mail?

There are so many useful information in your post, I like it all the time. And I want to share this what is aso with you,you can take a look. This is very useful.

pinoybay are almost located in the whole world. So they love to watch these Pariwiki Tv Shows/ Pinoy Tv Replay on a daily basis.

Bade Achhe Lagte Hain 2 is a upcoming Hindi Indian soap opera that will
premiere on 30 August 2021 at 8:00 P.M. in Sony Entertainment Television.

This blog is very impotant for user, I like it very Much and i also
want to creat a bolg like same as your blog name MXplayer TV.

Watch and download Korean drama, movies, Kshow and other Asian
dramas with english subtitles online free. Dramacool for everyone!

KissAsian is the best website to Korean dramas and movies online free with
English Subtitles and Dubbed. This website Chris Gayle, movies of genres ...