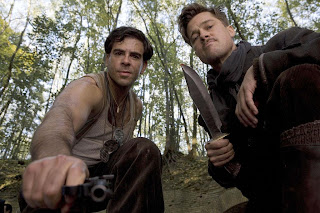 I really want to spoil the ending of “Inglourious Basterds.” But I know I shouldn’t and since I want you to go into this film without knowing how it ends I’m going to do you a favor and just say it is awesome. I will say, however, that if you go into Quentin Tarantino’s World War II Nazi-scalping drama looking for historical accuracy then you’ll probably be disappointed. And if you’re a history teacher you may not want to bring your class to see this flick because they’re likely to fail their final exam.

Since Quentin Tarantino directed this war movie, a first for the former video store clerk, there are some things you know you’re going to see. You’re going to see long scenes of dialogue that at first appears to have nothing to do with anything. It’ll most likely take a second viewing to really appreciate these scenes. They’re in “Reservoir Dogs.” They’re in “Pulp Fiction.” They’re in “Kill Bill Vol. 2.” They’re in “Death Proof.” I’m sure they’re in "Jackie Brown," but I’ve only seen it once and was slightly bored. Probably because of the long scenes of dialogue. The opening scene of “Inglourious Basterds” is very simple and involves lots of talking but I’d be lying if I said it wasn’t filled to the brim with excruciating suspense.

And you’ll also find lots of violence in “Inglourious Basterds.” Brad Pitt is the top billed actor and here he plays Lt. Aldo Raine who is the leader of the Inglourious Basterds which is a small group of mostly Jewish-American soldiers who go around Nazi-occupied France hunting members of Hitler’s army. There’s one soldier, dubbed “The Bear Jew” played here by horror director Eli Roth. His weapon of choice is a baseball bat (how American!) and his enemy of choice is, of course, Nazis who won't divulge important information. Raine orders his men to collect 100 Nazi scalps. If you don’t want to see Nazis getting scalped then don’t see “Inglourious Basterds.” (Although, the film could of used a few more scalpings if you ask me).

Meanwhile a young French Jewish woman (Mélanie Laurent) who escaped the evil clutches of a sadistic (aren’t they all?) Nazi named Col. Hans Landa (played with Oscar quality perfection by Christoph Waltz), sees an opportunity for revenge when her movie house is chosen to hold a huge Nazi movie premiere. Many high ranking officers will attending and she’ll stop at nothing to make sure they all burn to death in a fiery blaze of Nazi death (you see old nitrate film used to be highly flammable). Raine and his men also plot an independent mission when they find out that the highest ranking Nazi, one Adolf Hitler, will be attending as well. We all know what shouldn’t happen in this movie, but we all know what WILL happen.

Tarantino has crafted another movie based on a whole bunch of random movies you and I have never seen or heard of and turned it into a digestible slice of Americana. The title is based on an old Italian “man on a mission” war movie titled “The Inglorious Bastards” and don’t ask me why his title is spelled incorrectly (although it might be obvious since the title is wrong as is the film's historical accuracy). But when you’re Quentin Tarantino you can get away with things like that. And of course there are the random people that show up. Look it’s Mike Myers! Look it’s that guy from “The Office!” Look it’s what’s her face from the “National Treasure” movies! Look it’s Samuel L. Jackson’s voice!

If you want a movie with suspense, lots of dialogue (most of which at time seems unnecessary but can actually be pretty witty and funny), and some great performances, then you should be going to see Brad Pitt kick some Nazi butt right now. And if you don’t cheer at the end of this movie, then you’re probably a skinhead or something. GRADE: B+