Out of Africa: You Shouldn’t Evict “District 9” From Your Summer Movie Schedule 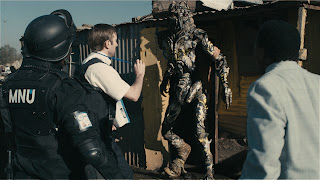 The less that is said about “District 9” the better. Is that because it sucks and isn’t worth talking about? Heck no. It’s a great movie. It’s original and inventive and exciting and complex and entertaining. But to discuss it any further would to ruin the fun. It’s certainly everything that “Transformers 2” wasn’t.

“District 9” is interesting because it borrows so heavily from other movies and yet it feels so fresh and original. I can spot influences from as far away as “Blood Diamond,” “The Blair Witch Project,” “Independence Day,” “The Fly,” “Starship Troopers,” and “Dawn of the Dead.” And even Entertainment Weekly film critic thinks there’s a little bit of “Enemy Mine” thrown in for good measure. Basically what I’m going to tell you about the film’s plot is something you already know from the trailers. A large city-like space ship has arrived on Earth over Johannesburg, South Africa. It just hovers there. Inside is a large race of malnourished aliens. The humans bring the aliens down to the surface and over time force them to live in squalor in a place known as District 9. If you’re thinking apartheid you’re correct.

The begins as a sort of documentary which sets up this alternative universe in which aliens have arrived on Earth. They sort of look like giant bugs and are derogatorily nicknamed “Prawns.” They speak in a weird frog-like language, but don’t worry we get subtitles. We’re introduced to an employee of the Multi-National United (MNU) which one critic lovingly reminded him of Michael Scott from “The Office.” This is a random dude who thinks he knows everything. He’s chosen to go into Disctrict 9 and evict the “non-humans.” You see these aliens have been living on Earth for over twenty years and now the government is forcing them out. This man is Wikus van der Merwe and he’s played by Sharlto Copley and I’m sure he’ll become a big star. He’s supposedly just friends with the director Neill Blomkamp.

I refuse to say anything more about the film’s plot. But I will discuss Blomkamp’s wonderful direction. The scenes that are “documentary-like” are well done and are never cheesy. The film has a great set up and as the film’s plot points are reveals it is interesting how quickly you get into it. I will say that Wikus is a character who is difficult to like at first and he really didn’t have me on his side until towards the end of the film.

And of course there is whole political allegory that is never too painfully obvious and yet it’s SO obvious. There is a moral center here and I think we all know what it is. It’s sort of amazing at how seamless this world that Blomkamp creates is. We get this alternate history in which the people of South Africa are living amongst aliens and however ridiculous it may seem it’s all too painfully realistic.

The film is really violent. There are lots of exploding bodies and splashing of blood. But I would never say it was exploitative in anyway. There’s plenty of action for those who enjoy that stuff and just as much thought provoking themes that intellectuals will enjoy. Besides how many exploding bodies are there in Transformers? None, exactly. And I was sort of surprised at how well the visual effects worked here. The film was made for about 30 million and you’d never really know it. Check out “District 9” for a truly one of a kind experience. It’s nowhere near my favorite movie of the summer, but you’d be hard pressed to find something as innovative as this. GRADE: B

Good thing there are songs that could somehow capture the emotions you’ve been awkwardly hiding for a long time.
released in 1990 a definitive anthem of the so-called Generation X and their struggle with love, life, youth, 21st century anxiety, and the
in-betweens. When the Beatles recording session happened in January of 1970 Harrison was
only 26 years old.

The person that wrote the article is addressed as Preston. Kentucky is our birth place but my spouse wants
us to move. What me and my family love is actually by read comics and I'd never give it further up.
After being associated with your his part of years he became an auditing officer and his
salary has been really doing. See what's new for my child website here: Mia Parking