Another Day in Paradise: “A Perfect Getaway” is Far From Perfect But is a Completely Sufficient Thriller 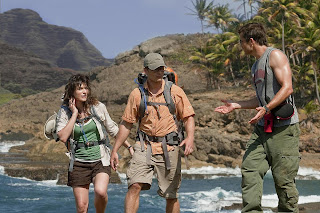 “A Perfect Getaway” does offers a few positives. It feature some beautiful tropical locations. It offers a pretty witty script from writer/director David Twohy. And lastly it has a pretty cool twist that won’t make you slap your forehead in disbelieve. I almost couldn’t believe it but then once I realized what was going on, I was like, hey that’s pretty cool and different. It makes me want to watch the movie again and see from a new point of view. But enough about that. “A Pefect Getway” I would classify as a thriller and although it takes awhile to get to the thrills, I appreciated it’s attempts at building suspense than just going for blood and guts whenever it had the chance.

The film opens with some home video footage of a wedding. And then we’re introduced to the newlyweds Cliff (Steve Zahn, shedding his goofy, typecast persona, kind of) and Cydney (Milla Jovovich, who is all eyes) as they’re about to embark on a treacherous hike in Hawaii for their honeymoon. There one of those couples who would rather do some dangerous hiking done rather than sit on a relaxing beach drinking colorful drinks. I’m going to get this out of the way up front, I didn’t really believe them as a married couple. I’m not saying their not good actors or that they’re necessarily miscast, but they seemed more like brother a sister than husband and wife. But that’s all I’m saying.

They meet up with another strange couple, also newlyweds, who are hitchhiking. They’re hesitant to give them a ride mostly because they’re super weird and creepy and grizzly. They are played by Marley Shelton and Chris Hemsworth. They speed off where they run into another couple played by Timothy Olyphant (perfectly cast) and Kiele Sanchez. Although sort of strange, Cliff and Cydney decide to hike along with them since they seem to know what they’re doing. Of course they run into a few other hikers who have just been informed that a newlywed couple had just been brutally murdered one on of the other islands. I take it you can guess that the killers might just show up.

A good chunk of the movie involves Cliff and Cydney trying to determine if Nick (Olyphant), an Iraq War veteran and innocent, southern Gina (Sanchez) are the killers or not. Cliff has his trustly Blackberry on hand, and when he gets a decent enough signal he attempts to read about the killings. There is even a poor quality surveillance photo of the killers, but Cydney informs him it looks like they could be anybody. They also think they’re being followed. Is it that strange hitchhiking couple or is there something more sinister out there?

Remember I said the screenplay was witty and that is mostly due to the fact that Cliff is a screenwriter. So him and Nick have conversations about one of Cliff’s scripts that’s currently in pre-production. They have conversations about plot and characters and even red herrings (which Nick naively calls ‘red snappers’). I found the conversation about red herrings most interesting as any alert viewer is going to try to figure out what exactly the red herring in the movie actually is. Some of the dialogue reminded me of “Scream” although it wasn’t quite as self-reflexive or savvy, but it was definitely above average for a movie of this type.

And like I said, the movie’s twists and turns were pretty interesting and well deserved. They never seemed forced and I enjoyed that the film took its time getting going. Too many movies these days rush to the gore, and not that I mind, but even I want a little substance once in a while. I enjoyed the film’s ultimate revelation and I think you might as well. And if anything could be learned from this neat little thriller, is that sometimes it’s safer to just stay home. GRADE: B