Fish Out of Water: “Ponyo” is a Colorful, Magical Tale of Earth’s Delicate Balance 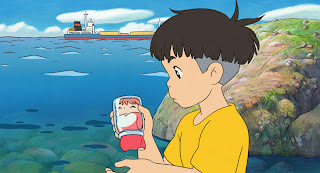 I would have never guessed in a million years that I’d be reviewing “Ponyo,” a Japanese animated feature film from legendary animation director Hayao Miyazaki. I have never seen any of his other films and that equally makes me feel happy and ashamed. I’m ashamed to call myself a film fan even though ive never seen his other films and yet I’m glad that I haven’t had to sit through all that boring, fantastical anime. I’ve never had much a desire for anime and I don’t think “Ponyo” will really change my feelings towards the subject, but I am willing to agree that it is a fun and beautifully hand drawn animated film with an interesting story (inspired by Hans Christian Anderson’s ‘The Little Mermaid’) a wonderful music score by Joe Hisaishi, and loveable characters.

“Ponyo” whose original Japanese title is something like “Gake no ue no Ponyo” tells the story of a little red fish. she winds up near the surface of the water and crosses paths with a young boy named Sosuke (voiced by the Jonas Brothers little bro Frankie). Sosuke is instantly smitten with the cute little creature and he names her Ponyo. He takes scoops her up in a bucket and runs back to his house on the cliff where he lives with his mother Lisa (Tina Fey). Of course Ponyo’s magical human-like “father” Fujimoto (Liam Neeson) who resembles the lead singer of an ‘80s glam rock band, isn’t too happy about this. It turns out that creatures who live in the ocean are meant to live in the ocean. And it also turns out that Ponyo, after licking a cut on Sosuke’s finger, has the power to turn human. And she has the desire to be as well.

Now anyone who has seen the Disney version of ‘The Little Mermaid’will recognize parts of this movie as being similar. Like for instance the desire of a character who is born of the sea to be on land. And let’s not forget the demanding father who doesn’t think it’s a very good idea. However, in this version there is an extremely evident environmental message as well (which I hear Miyazaki is known for). It turns out that the water in which little Sosuke’s house is near just happens to be very polluted. Fujimoto complains about the human’s using the water as their own personal garbage bin and how it angers the sea gods or whatever you want to call it.

Eventually little Ponyo (Miley Cyrus’ little sis Noah) makes her way back to daddy in the water much to Sosuke’s dismay. But there is no stopping the little critter and she begins sprouting arms and legs and she’s whisked off to the surface to be reunited with Sosuke. All of her little fish sisters transform into big beautiful blue fish and help her ride the waves back into Sosuke’s life. She takes on the form a young girl similar to Sosuke’s age and his mother says it’s alright if she stays with them. Here she learns all about basic human things such as eating dinner. These scenes inside the house are simply enjoyable in the traditional “fish out of water” way. Literally. But unbeknownst to Ponyo and her new human friends, the water is rising rapidly due to the moon’s new position in the sky (which is something I missed along the way) and because Ponyo is now a “human” earth is completely out of whack.

But let’s be honest, the real reason most people would venture to the theater to see this movie is its unusually animation style. Like I said, Miyazaki employs actual hand drawn animation and from what I understand no uses of computers at all. I can hardly remember the last traditional animated feature film I saw in the theater. It was probably “Lilo & Stitch” way back in 2002. Disney since has sort of given up on that type of animated, save for December’s “The Princess and the Frog” which will wisely return Disney to its traditional animation roots. At first I was almost a little put off by “Ponyo’s” animation. It almost seemed cheap and low budgeted. Something you’d find on Saturday morning but blown up to huge proportions. But then I realized that I just wasn’t used to seeing animation that way.

Another thing that is just odd to me is the use of American actors doing the voicework. This a foreign film through and through and while it was enjoyable to hear familiar voices (and it certainly helps the movie be more accessible to American audiences) it is sort of weird hearing Betty White’s voice come out of a character named Noriko. Lily Tomlin, Cloris Leachman, Cate Blanchett and Matt Damon are some of the other talented actors lending their voices.

“Ponyo” will be a huge success amongst those who flock to see these types of films and as an outsider I will say I was pleasantly surprised at how much I enjoyed the film. I can’t say that it makes me want to see movies like “Spirited Away” or “Princess Mononoke,” but I’m glad I was able to put my prejudices aside when it comes to anime and enjoy a fun animated movie that anyone can enjoy. GRADE: B+

Hello, I think youyr website might be having browser
compatibility issues. When I look at your blog site in Firefox, it looks fine but when opening in Internet Explorer, it
has some overlapping. I just wanted to give you a quick heads
up! Other then that, amazing blog!