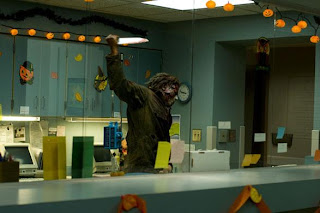 OMG. Please whatever you do, please do not see “Halloween II.” I am a huge Halloween franchise fan and I’m here to say that it’s most definitely the worst of any Halloween movie starring Michael Myers (I don’t really count Part III, but it might even be worse than that piece of garbage). I’m not going to sit here and tell you what to do, so if you want to see the final chapter of Rob Zombie’s “vision” then by all means be my guest. There are so many things wrong with this movie I don’t even know where to start.

I’m going to forgive the fact that this movie even exists. There will always be Michael Myers movies it’s just a fact. Even the godfather of the Halloween movies, Moustapha Akkad (who unfortunately died back in 2005 in a Jordan terrorist attack) has said that he would make at least 22 Michale Myers movies, so there’s no surprise that we’ve got ten so far. What distresses me so much about this new movie is that the producers actually thought Mr. Zombie was talented enough to make another movie. Yeah he has vision, but I’m not so sure it fits with the Halloween movies. He should be directing “The Devil’s Rejects II” not “Halloween II.”

So Michael conveniently finds Laurie in the hospital where she’s recovering from surgery. In an annoying little twist (aka writer’s block) it turns out everything at the hospital is a dream and it’s really a year later. Laurie has gone from a virginal, innocent teen into a wild and crazy young woman who has weird dreams. She lives with her friend Annie (Danielle Harris) and her sheriff father Brackett (Brad Dourif) in an isolated farm house in the middle of nowhere. Laurie is all goth now which I guess is what happens when you’re either a) an attempted victim of Michael Myers or b) in a film directed by Rob Zombie (I’m thinking it’s a little bit of both). So Laurie whines all the time because she thinks Michael is going to come after her, but little does she know that Dr. Loomis (Malcolm McDowell) has written a tell-all book about Michael Myers and he reveals Laurie and Michael’s blood relation. That makes her even more crazy so she decides to dress up as Magenta from The Rocky Horror Picture Show (remember Rob Zombie is the director) and weirdo goth friends dress up as Columbia and Dr. Frank-N-Furter. They both die, if you can believe it.

Do you even care about any of this? I certainly didn’t. Especially when Mrs. Zombie shows up all in white looking horribly out of place. If Mr. Zombie was going for unintentional laughs then her certainly succeeded by a mile. Oh those stupid flashbacks and visions are so stupid I literally slapped my forehead. Zombie also makes every victim so horrendously obnoxious that he practically justifies Myers killing him or her. He even breaks into a stipclub an and kills the sleazy owner and his stripper girlfriend for no real reason except to show a naked woman being smashed face first into a mirror. Now, if any of this were to occur in another movie not related to Halloween, then maybe it would make sense, but nothing in this movie feels like a Halloween movie. It’s obvious that Zombie had almost complete creative freedom to come up with whatever horrendous crap he could think of. And he did. It’s 100 minutes of crap.

Please for your well-being I cannot recommend “Halloween II” for any reason whatsoever. It has no redeeming qualities at all. The cinematography is lame and overdone. The music by Tyler Bates is dumb and he doesn’t even use John Carpenter’s theme until the end credits (the best part). Even the death scenes are repetitive and overly done. I realize Michael is a psycho but there’s no reason to stab someone 234385757 times and for Rob Zombie to show it. It makes the first film (which I hesitantly and generously gave a B-) look Oscar-worthy. Ok, not really but you get my point, right?

There should be a government warning on this flick ‘cause it’s bad for your health. Just do yourself a favor and Just Say No to “Halloween II.” I wish I had. GRADE: F

I'm very happy to find this site. I want to to thank you for your time just for this wonderful read!!
I definitely really liked every part of it and i also have you saved as a
favorite to look at new things in your site.