House Trap: Low Budget “The Collector” is Better Than the ‘Saw’ Sequels, But That’s Not Saying Much 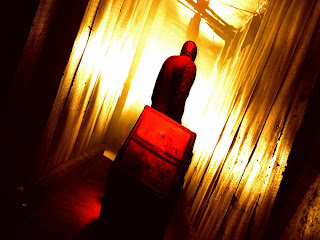 I can’t help but blame the “Saw” movies for “The Collector’s” lack of originality. Had "The Collector" come out before "Saw" I’m sure it would get slightly more praise. Then again when it comes right down to it, "The Collector" is just a small, low budget exploitation flick with sadistic violence and torture. Of course it certainly has an intriguing enough premise that made me want to check it out. A man enters a house with the goal of robbing it. However, as he’s about to break into a safe, he realizes there’s someone else already in the house who is more sadistic then he ever imagined. Cool right? A robber is faced with a moral dilemma. Does he try to get out of the house to save his own life or does he attempt to help the very people he was intending to rip off?

"The Collector" is a low budget movie. It was shot on 16mm film stock which gives it a dark, gritty grindhouse feel. Fans of 1970s horror take note. The film features no name actors who are all decent enough. The film is apparently proud of the fact that its director wrote “Saw IV,” “V” and the upcoming “VI.” I stopped watching those movies at part IV simply because they were basically all the same. Of course that doesn’t really matter since most horror film franchises are the same plot or premise repeated ad nauseam. But anyways, "The Collector," which is a sort of strange hybrid of "Saw," "The Strangers" and "Home Alone" (!) is watchable enough and really nothing more.

Arkin (Josh Stewart) is a handyman who works for Michael (Michael Reilly Burke) in his home. Michael has a wife, a teenage daughter and a younger daughter. Arkin has a sweet moment with the young girl Hannah (Karley Scott Collins) because it turns out he has a young daughter himself. It turns out that his ex-wife owes a lot of money to a lone shark and she has until midnight to pay him off. Since desperate times call for desperate measures, Arkin, knowning about a rare and expensive stone in Michael’s safe, decides to break in while the family is away to pay off his ex-wife’s debt. Little does he know that when he breaks inside, a masked maniac has booby-trapped the entire house and has been torturing Michael and his wife, while their wild teen daughter is out unbeknownst with her horny boyfriend. And little Hannah is no where to be found.

Arkin, who is a decently fleshed out character for the most part, realizes that it's up to him to help the very people he was about to rob. It’s sort of amazing how quickly I was on his side. You try to put youself in his shoes and you’d like to think you’d want to do the right thing, but honestly, I’d be out of there! He sees Michael all bloody and attempts to release him. He quickly discovers that every time you grab a knife or flick a light switch something sharp or pointy will go flying into your face. The maniac even pours some sort of sticky acid in one of the bedrooms which eats through shoes and books, but doesn’t seem to eat through the floor. Oh and it melts a cat. Gross.

Being a fan of gross movies I appreciate the film’s dark and twisted Rube Goldberg-ian set-ups which always result in some kind of bloody or gory death. Of course, it’s really hard to swallow that this guy could really set up all these traps. And for what reason? Just because he’s a psychopath? It seems like too much work and too little payoff if you ask me. Like where does one get 20 bear traps to fill the living room with? It was hard enough to swallow Macaulay Culkin setting up his traps in “Home Alone,” but I guess I’ll give the Collector the edge since he’s a grown up.

This is certainly a horror film through and through, but is it really scary at all? The film features a few sequences of genuine tension, but I’m not so sure I would call it scary. The Collector himself is pretty creepy and when he looms into frame and stares the camera it sent a small shiver up my spine, but otherwise he didn’t give me nightmares (Niether did the film's unrealistic CGI spiders). Overall, “The Collector” is a decent enough horror flick, with a breezy runtime, but since there have already been five movies with saw in the title, it feels a tad too little too late (Although I still think this is better than all the “Saw” sequels). And I bet you’ll never guess what it is this guy collects. It ain’t stamps. GRADE: B-

I like the valuable information you provide in your
articles. I'll bookmark your blog and check again here frequently.

I am quite certain I will learn lots of new stuff right here!
Good luck for the next!