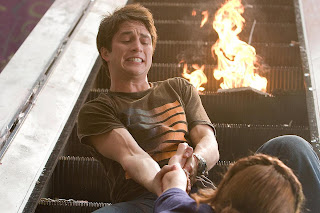 Whenever you start to see more than three chapters of a horror franchise, you have to stop taking it seriously. Ok so I stopped taking the Final Destination movies seriously by the end of the first movie. The first film was, dare I say, a brilliant new take on the slasher film in which the Grim Reaper actually stands in for the masked killer and his weapons of choice are everyday accidents. The novelty of the films soon became any everyday situation could be a death trap. We’re talking going to bathroom, packing up your belongings, going to the dentist, riding an elevator, going tanning. And now we get to add car washes, swimming pools and movie theaters as potential places of gruesome deaths.

Director David R. Ellis who most recently gave us the hilariously campy “Snakes on a Plane” takes creative control of this fourth film “The Final Destination” (I’m not even going to spend a second complaining about the film’s strange and obnoxious title, whoops too late). Ellis directed the second chapter in this series and immediately turned it into a silly story about a bunch of people trying to escape death. These movies are just excuses to show people being diced and sliced and gouged and smashed and chopped. There is no artistic merit and no redeeming qualities. They are a product of which I enjoy supersized.

This time around Ellis stages a graphic speedway car crash in which many people are viciously killed by falling debris and tires and other sharp objects. This film’s hero Nick (second rate James Franco look-a-like Bobby Campo) has a premonition that him and his three friends and many others will die in a horrible accident. He’s able to warn them in time and his friends escape along with a few others. If you’ve ever seen any of these movies you know exactly what happens next. Death isn’t happy that these people survived because they ruined his “design.” So he comes up with even more gruesome fates for them. So it's only a matter of time before beautiful people are sucked through a pool drain, or sliced through a metal fence, or ground up in an escalator.

This is not a good movie. Want proof? The filmmakers knew the only way they could get people in the theater a fourth time was to film it in 3D. It's certainly the film's most original concept. The third dimension here actually helps the proceedings and employs some pretty desirable effects. It certainly doesn’t help build character, or make the story more plausible or help the actors with their bland performances. But you know what? None of that really matters. I just spent the night before watching Rob Zombie’s "Halloween II" and you can tell that guy really thought he was making a good movie. And he failed miserably. Here, Ellis and his team are trying to just make a fun, campy gory ride and while it’s not good cinema, I’m perfectly okay with that. He didn’t make an unpleasant movie. He knows he made a B movie and he succeeded.

If you’re a fan of these movies, there is no reason you won’t enjoy “The Final Destination.” It has a real fun sense of humor about itself (the film’s climax cleverly takes place in a 3D movie theater) and it is a welcomed source of “turn your brain off” fun. The film is probably more funny than scary but any movie in which a racist redneck is dragged down the street by his own truck while on fire is certainly ok in my book. GRADE: B