The Comedy of Errors: “Funny People” Isn’t Really That Funny 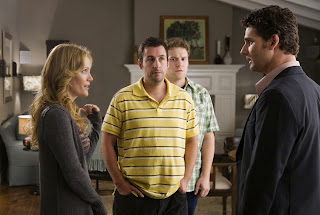 I didn’t think “Funny People” was very funny. I know I know, I realize it’s supposed to be more a drama than a flat-out comedy. I knew it was about Adam Sandler’s character realizing he had a terminal illness. I knew all of that going in. but that still didn’t make any of the other funny parts very funny. I am one of Judd Apatow’s number one fans. I loved “The 40 Year-Old Virgin” and loved “Knocked Up” even more. I loved all the other movies he’s produced since then… “Superbad,” “Pineapple Express,” “Walk Hard,” and “Forgetting Sarah Marshall.” Heck I even liked “Drillbit Taylor” for crying out loud (and I even had Lisa Lampanelli, who has a small cameo, sign my Blu-ray when I met her and she even said, “This was a cute movie wasn’t it?”). So it is with my trepidation that I’m hear to say that I didn’t really enjoy Judd’s third film “Funny People” very much. There are a few scattershot laughs and although the movie’s never boring, it never quite gelled for me.

I’m not really much a fan of Adam Sandler. I enjoy some early Sandler, including “Happy Gilmore,” “Big Daddy” and “The Wedding Singer.” I don’t like Billy Madison, his Waterboy character is annoying, I refuse to watch any of his bits from SNL and his Hanukah Song is severely overrated. Having said that I guess I can blame him for 60 percent of the reason why I didn’t enjoy Funny People. He gives a decent enough performance as George Simmons, and Adam Sandler-like actor/comedian who learns he has a terminal illiness. He handles it rather strangely by confronting wannabe stand up comic Ira Wright (Seth Rogen) that he wants him to write jokes for him and be his assistant. Ira is the only one he shares his secret with and he’s forced to confront his own mortality. After all, stand up comedians don’t live forever.

Blah blah blah. I frankly didn’t like Sandler’s character that much and I’m not even sure if Sandler’s fans will enjoy the character that much. I realize Judd, who wrote the film, is making him purposely unlikable, but I think he goes too far. Rogen is likeable as always and is definitely one of the film’s bright spots, as are his roommates Leo (Jonah Hill) and Mark (Apatow newcomer Jason Schwartzman) who are constantly teasing Ira because they have roles on a popular NBC sitcom, which looks awful. I wish Apatow had focused more on this group of people, but if he had it would have just seemed like Sueprbad-lite or something, so I understand why he felt he needed to be more “serious.”

George then contacts an old flame named Laura (Apatow’s real life wife Leslie Mann) who has now started a family with Clarke (a game Eric Bana). The film’s third act involves George and Ira visiting Laura and her kids while he attempts to woo her back. Eric Bana gives a great performance, in his native tongue, and while he’s almost portrayed as the stereotypical “angry, unfaithful husband” he gives the role enough originality to break free from that mold.

Probably one of the more surprising qualities of the film lies in its cinematography. I’m not usually one to mention the director of photography when it comes to comedies, but since Apatow has employed Spielberg regular Janusz Kaminski. Some shots literally look as if they had been deleted frames from The Diving Bell & the Butterfly. The film has a beautiful and interesting look, but all I can say is it really necessary? Good work, as always, Janusz. And lastly the film has a great soundtrack with a sweet and simple score from cast member Jason Schwartzmen. And remember people he used to play the drums for the band Phantom Planet.

And lastly, not to be Debbie Downer or anything, but I’m honestly not the biggest fan of stand up comedy. Yeah there are the ones I like such as Kathy Griffin and Ms. Lampanelli whom I mentioned earlier, but none of the comedian jokes that were mentioned throughout the film made me laugh. What did make me laugh were the standard Apatow-isms, like when Eric Bana recounts his trip to China and Seth Rogen mentioned it seemed like a scene from “The Deer Hunter.” It’s jokes like that that are worth laughing about, and sadly, there isn’t much in “Funny People’s” overlong runtime worth dying over. GRADE: C+

Terrific post but I was wondering if you could write a litte more on this subject?
I'd be very grateful if you could elaborate a little bit more.
Bless you!