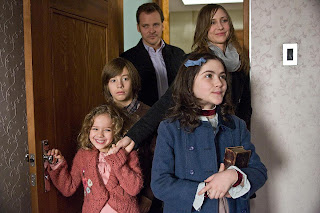 Esther is one mean bitch! She is evil incarnate and she certainly shames little Damien from “The Omen.” Heck, even Macaulay Culkin from “The Good Son” would be crying for his mommy if he ever met Esther. Esther, a little Russian 9 year-old orphan, is played brilliantly by Isabelle Fuhrman. Dakota Fanning better watch her back cause a new child actor is in town! “Orphan” is an “evil child” movie in which a child, who is the main focus of the story does evil things and there’s a mystery to discover a) why a child is doing such evil things or b) figure out an explanation for why evil things are occurring. Of course when it comes to b, we the audience usually know what’s going on but the other characters don’t. In fact Orphan is pretty neat in that it gives us both a and b. We know there’s something up with Esther, but we don’t really know what. We know she’s bad and scary but we don’t know why. And we enjoy watching the other characters fumble around trying to come with an explanation about why children are getting pushed off playgrounds and why nuns are getting hammered. Literally.

We’re introduced to all-American Connecticut couple Kate and John (Vera Farmiga and Peter Sarsgaard) who has just lost a child. Kate recently miscarried and its taken a huge toll on her. We see her in therapy and we learn she is a recovering alcoholic. Even though Kate and John have two other kids - a young daughter named Max (Aryana Engineer, super cute and super good) who is almost completely deaf and an older son named Daniel (Jimmy Bennett) – they decide that they want to adopt a child. They end up at a local school for little girls and there is where they meet Esther. She paints instead of playing with the other youn girls; and there’s a reason. She Russian and she wears dresses instead of more traditional little girl clothes; and there’s a reason. She’s proper, articulate and intelligent; and there’s a reason.

Kate and John think they’ve adopted the nicest young girl on the planet but what they don’t know is that she’s a conniving little bitch who kills people and has serious mental stability problems. She even pushes a fellow schoolgirl off the playground when she’s made fun of early in class. What is great about “Orphan” is knowing right away that Esther is evil. We’ve all seen the TV ads, so we’re not surprised when ominous music begins to play whenever she’s comes onscreen. Why don’t know why she’s evil or where she really came from and that’s what makes the movie fun to figure out. First time screenwriter, David Johnson has actually crafted a pretty decent script for such a standard type of thriller. And Spanish director Jaume Collet-Serra – who gave such a surreal and creepy vibe to the “House of Wax” remake – manages to wrangle out some pretty tense situations. His handling of certain scenes with the deaf Max, who Esther implicates in some of her dastardly crimes, is very well done. He even manages to make a labyrinthine playground a chilling location.

Of course don’t be fooled, cause there are going to be people who think this movie is garbage and over-the-top violent trash which revels in disturbing behavior caused by a preteens, but you know what? It’s well-made trash and has a few scares and even some pretty dark humor as well. Some of Esther’s lines are priceless and there are even a few scenes in which I was rooting on behalf of Esther’s badassness. I guess we can look at “Orphan” as an “anti-adoption” parable, but if Brangelina have so man adopted kids and not one of them has killed anyone, I think it’s safe to say that Esther is certainly the odd one out. GRADE: B+

Talents which includes their Smoke Screen and Preparation skills remind me a tiny bit with the
rogue class in Globe of Warcraft, helping to make them a bit of a
crossbreed form of a hunter and a rogue. Capcom 3 Fate of Two Worlds is the highest-selling Marvel
vs. That would make five Resident Evil games in the top 10.