American Gangster: I’m Not Too Big a Fan of “Public Enemies” 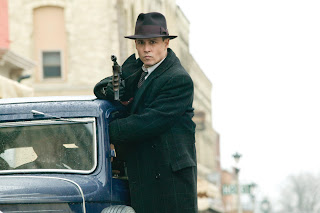 There is nothing really technically wrong with Michael Mann’s John Dillinger crime saga “Public Enemies.” Let’s just say I wasn’t living in gangster’s paradise. In fact, there were some parts where I could barely keep my eyes open. But maybe that was because I was tired (I went to a 4:50 PM showing ha!) or because the surround sound wasn’t quite right. I’m officially convinced I could have recreated a better audio experience with my Blu-ray home theater system, but I digress. Besides the fact that the flick, at times, looks like something you could easily access for free on YouTube, Public Enemies will appeal to fans of classic gangster pictures, of which I’m completely indifferent about.

I’m a fan of Michael Mann’s Collateral because it is suspenseful and draws you in from the opening scene. Even Mann’s early Hannibal Lecter flick “Manhunter,” which sort of gets forgotten about since Anthony Hopkins became Hannibal, is completely enjoyable. I’m going to go on record by saying, and I don’t think I’m alone here, that “Miami Vice” was completely and unabashedly horrendous. So in comparison to that movie, Public Enemies is amazing. And yet I felt mostly underwhelmed by the experience. I mean, Johnny Depp as John Dillinger is great, which really isn’t a surprise. Christian Bale is good as well, although he’s not really around that much. And I enjoy Oscar winner Marion Cotillard who, as one of the film’s few female characters, shows up here as Dillinger’s love interest. Apparently according to the credits Stephen Doff is in there but I didn’t even recognize him.

I think the biggest problem here was that I just didn’t care. I think that’s really a problem that I have to deal with though. I enjoy when movies let you “root for” the “bad guy” but I guess I really didn’t think John Dillinger was all that bad. So he robs banks, who cares. By today’s standards he’s practically Gandhi. I didn’t really care if he got caught or got away. In most of these types of movies you’re supposed to be on the side of the bad guy, but like I said, I didn’t care much. and when movies like this take place in this time frame where everyone is practically dressed the same it’s sort of difficult to figure out who are the cops and who are the robbers. Ehh.

I appreciate the film’s look a lot. It’s cool that a studio would pay to produce a big epic period piece and make it look like your Uncle George’s wedding video. According to imdb the film was shot with a mix of traditional 35mm film and video, which is the same as Mann’s previous movies Miami Vice and Collateral. You can really feel the intimacy and really puts you into the action. Although I guess it totally didn’t work on me since I could hardly keep my eyes open. And some shots were so video looking, I almost cringed. It felt like I could have been the camera operator.
I guess the problem ultimately lies with Mann’s not-too-special script who he co-wrote with Ann Biderman and Ronan Bennett and that’s a shame cause Biderman wrote one of my favorites “Copycat.” I just didn’t find this story fascinating, but I could see how others would. The film is technical achievement in terms of the recreation of the 1930s, but for me for you dawg, it was just ‘aight. (And Billy Crudup who plays J. Edgar Hoover, doesn't even cross dress once! Talk about historical inaccuracies...) GRADE: C

There was an article about Mann and Spinotti's (the DP) decision to shoot on HD in this month's "American Cinematographer." It said how they shot tests using an HD camera and 35mm film and then compared both results. They ultimately went with the HD camera because there were a lot of night scenes, and HD captured this better. There is some 35mm in the final movie, but just for some special effects stuff.