Mechanical Failure: “Transformers Revenge of the Fallen” is Big on Robots, Effects and Clichés, Short on Everything Else 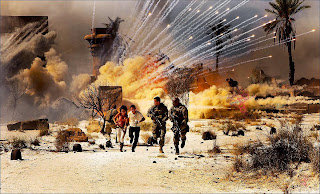 The thing that remains the most interesting in both films is one Shia LeBeouf as Sam Witwicky, who you’ll remember in the first film unwittingly purchased a car that was actually a robot from another planet. But he was a good robot; an Autobot. But for every good robot there is a bad robot; the Decepticons. So poor Sam, who just wants a cool car and a girlfriend, gets stuck in the middle of an ancient war of machine vs. machine. At the end of the last movie everything was right in the world. The bad guys were defeated… or so we thought.

A piece of the “allspark”, a cube device that the robots were fighting over so they could control the universe (and who wouldn’t want to control the universe?) is unknowingly left in Sam’s sweatshirt and it somehow lets the “defeated” Decepticons come back to life. Or something like that. Let’s not get caught up in plot details because there are lots of explosions and chases, and guns firing and military personnel looking at flashy computer screens and shouting gibberish that you and I don’t understand. And if you couldn’t tell from the ten thousand explosions, this is a film directed by Michael Bay! So we get lots of “hero” shots of characters moving in slow motion and outrunning explosions, which I’m pretty sure is impossible, but I’d have to check with the guys from Mythbusters first.

Ok, so why is this movie so dreadfully bad? Well first of all it’s way too long. It’s 150 minutes of mind-numbing action that isn’t very entertaining to begin with. It’s entertaining seeing the robots transform from a vehicle to a five story robot ready to kick ass, but once you’ve seen a robot transform a few times, it feels like a hundred times. And then we get the annoying attempts at comic relief. We have two “eubonic” spewing borderline racist robots who keep beating each other up. The audience laughed a lot, but I didn’t. then we get a cute little transformer who sounded a lot like Steve Buscemi who was cute until he started humping Megan Fox’s leg. And then there was that giant robot with the two large wrecking balls that were supposed to be… well you get the idea. Michael Bay has some serious issues! And I hated the addition of Shia’s college roommate (Ramon Rodriguez) who was just sort of annoying. He was just there to prove Michael Bay can direct a movie with more than just Caucasian actors. And John Turturro is more of a ham than Miss Piggy.

The most normal and enjoyable part of the movie are Sam’s unwitting and cute parents played by Kevin Dunn and Julie White. Mom eats some pot brownies while helping Sam move into college and she starts going sort of crazy. And let me just say that this is the most accurate depiction of college I’ve ever seen in a movie. Wow I can’t believe I got that out with a straight face.

Point is: This is a cliché-riddled mess (I can’t believe no one uttered “I’m so cold”) and I can’t really recommend it unless you have ADD. And I’m going to do the writers a favor and not mention them by name here. If you do find yourself in a movie queue for this flick, be sure to bring aspirin. When I was watching the movie, I heard a baby crying. I felt his pain. GRADE: D+

It's strange how this and "Star Trek" got such different reviews from everyone when both movies have the same writers.

I read an article today that mentioned that the writing of "Transformers 2" was suspended by the writers' strike. Afterwards, they were under a deadline to finish. So, maybe they didn't have enough time to work on the script?

ha, well let's not forget that Ehren Kruger wrote Transformers as well, so i guess it's probably his fault