Home Sweet Home: “Away We Go” is a Pleasant and Funny Road Movie 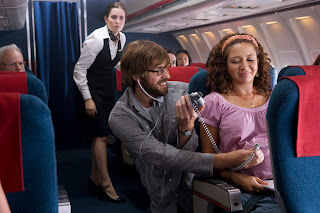 I’m a fan of director Sam Mendes. The only one of his films I have yet to see is Road to Perdition. And that probably has more to do with the fact that I have no idea what the word perdition means. Although my good friends Merriam and Webster tell me “utter destruction” and “eternal damnation.” Hmm, maybe I actually need to see that movie. But I digress, his newest film “Away We Go” is very Mendes and yet completely non-Mendes. The script by first timers Dave Eggers and Vendela Vida is sort of “American Beauty” meets “Juno” with a little “North” thrown in. the story is something we come to expect from Mendes (an interesting point-of-view of American marriage) and yet the style of the film doesn’t have that glossy, high production value of his previous films. While I sort of miss the trademark Sam Mendes “look” I actually welcome the director as trying something different.

The film is about a pregnant couple (interracial!) who aren’t married. The coup[le is played by John Krasinski and Maya Rudolph. They don’t plan on getting married. They live in a little shack. They mostly work from home and now that Burt’s (Kraskinski) parents are going to be moving to Europe, they decide to do some traveling and figure out where they’d like to settle. So Burt and Verona (Rudolph) are off to visit her former boss played by Allison Janney in another quirky showcase role that she does best. She plays Lily, who could easily win Worst Mother of the Year. She makes fun of her chunky daughter and her obvious lesbian tendencies (she’s pudgy and has short hair!). Of course she makes us laugh for the 10 or 15 minutes she’s onscreen.

Our unmarried heroes also visit Burt’s cousin who is really just a family friend. Her name is LN and she’s played by Maggie Gyllenhaal. I said her name was LN and its pronounced just as it looks (Ellen). She’s one of the those weird hippie new age mothers who still breastfeeds her 5 year old, doesn’t use strollers (she loves her child, so why would she want to push him away from her) and shares a “family bed” in which she sleeps with her husband and two young children. Gyllenaal’s performance is brief and brilliant and she does the best with the short screen time she’s given. Burt and Verona’s reactions to their odd way of life is nothing short of priceless.

Burt and Verona make other stops along the way and its mostly to show us, the audience, how there are so many ways to define “family.” There are so many different families and this journey is a way for our heroes to figure out the types of parents they want and hope to become (This brings up the fact that this movie actually reminded me of Rob Reiner’s “North” a movie that film critic hated hated hated hated). We slowly get to learn interesting pieces of information from their past. We learn that Verona’s parents died when she was just out of college and how that has affected her and her sister whom they visit as well.

Mendes gives us a movie that isn’t extraordinary (it’s not American Beauty or Juno although, like I said, it’s similar to both) but he gives us a story about two characters we get to know and care about and who are surrounded by complete nutjobs. And the performances are great. Rudolph can certainly do more than just a good Whitney impersonation, although Krasinksi seems to be playing off his goofy "Office"character, which isn't necessarily a bad thing. We’re not quite sure where exactly Burt and Verona will end up but like most movies of this type, it’s the journey that makes it fun. GRADE: B