The Rules of Engagement: “The Proposal” is a Comfortable and Funny Romantic Comedy 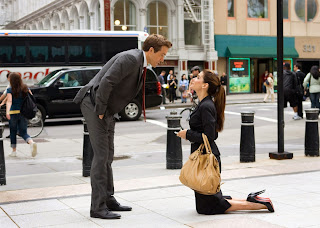 Let me get this out of the way up front, my opinions of this movie are completely biased because of Betty White. If you don’t know me - and if you don’t, why are you even reading this? – I am a huge Golden Girls fan. So if any Golden Girl is going to be in a movie, I’m going to be there. And luckily she’s in “The Proposal” a lot. And she actually gets some funny things to do and say, instead of the standard “old person” role of three unfunny and unmemorable scenes. Having said that, the film is a decent romantic comedy. It’s formulaic and sort of unoriginal, but its leads are charming and have decent chemistry. Do you hope they get together in the end? Sure. Are you surprised that it happens? Not really.

The film sort of starts out like “The Devil Wears Prada.” Sandra Bullock is Margaret Tate, a pushy, unpleasant boss in a publishing company. Ryan Reynolds is Andrew Paxton, her desperate personal assistant. He’s only keeping this pathetic job because he hopes it will lead to an editor’s job. Ms. Tate is what we’d call a bitch. Everyone in the office hates her and tries to avoid her at all costs. But like we learned about Meryl Streep’s character in “Prada,” she’s really a vulnerable human being on the inside, lonely and sort of pathetic. Margaret, being from Canada, has just learned she’s going to be deported and with a little quick thinking grabs her trustworthy assistant and insists they are engaged and would therefore not have to leave the country. She basically blackmails him into it and if they were to get caught she’d be sent home permanently and he’d be fined and thrown in jail. So they go of to Andrew’s family’s place in Alaska determined to convince the entire civilized world that they are in fact in love and ready to be married.

This is wholly ridiculous and dumb idea. In real life I imagine this would be impossible, but I think we’re supposed to just go with it and accept it as reality. But if you can get over that then you’ll more than likely find something here to enjoy and I found the two leads to be enjoyable. Even though she comes off as a jerk at first, I found myself caring about Margaret and about the horrible thing she’s making Andrew try to pull off. It’s actually fun meeting his family: mom is Mary Steenburgen, Dad is Craig T. Nelson and 90-year-old Grandma is White. Margaret soon learns how well off Andrew is but his father is unhappy that he’s wasting his life away in New York City trying to be a writer when he should be more involved with his family and half the town which his father owns.

Meanwhile we lots of tradition pre-wedding stuff. Like Andrew’s female relatives taking Margaret out for a bachelorette party starring the town Hispanic as the stripper (Oscar from The Office). And they even tailor Grandma’s old wedding dress to fit Margaret even though it doesn’t quite fit her. After all everyone knows how busty Betty White is. Writer Peter Chiarelli even introduces us to Andrew’s ex-girlfriend Gertrude (Malin Akerman) and I have to give him props for not turning the character into an obvious plot point. However, that doesn’t stop him from actually making Margaret and Andrew, two people who couldn’t possibly be more different, from actually realizing they are in love, in just a few days’ time.

I’m going to recommend The Proposal on the sheer fact that it feels much like “early Sandra Bullock.” I miss the days of “While You Were Sleeping” in which you were charmed by her character’s odd predicament and you didn’t feel ashamed for feeling that way. Bullock and Reynolds have some great chemistry even when director Anne Fletcher (“Step Up,” “27 Dresses”) isn’t making them rub against each other completely nude (That was such a freaking odd scene, which they are selling the crap out of in the previews). The movie also has the traditional other oddities including a fluffy dog named Kevin who has an unfortunate run in with an eagle.

You could do worse than “The Proposal,” but if you go in realizing it’s just another romantic comedy, you might actually find yourself laughing and having a good time, despite the fact that you could have written the script yourself (And of course, Betty helps). GRADE: B

I'll immediately grab your rss feed as I can't find your
e-mail subscription link or newsletter service. Do you have any?
Kindly allow me understand in order that I may subscribe.
Thanks.

Hi, i think that i saw you visited my site so i came to “return the favor”.I am attempting to find things to enhance my website!I suppose its
ok to use some of your ideas!!

Thanks For Sharing Article