A Despair to Remember: “The Hangover” is Hilarious and Hardly Headache-Inducing 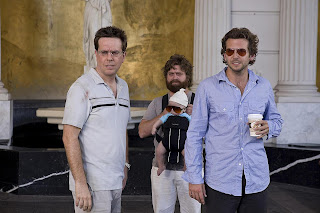 “The Hangover” is a lot smarter than you think it would have any right to be. It takes a sort of standard premise… a Las Vegas bachelor party… and makes it more interesting: A tiger in the bathroom! Mike Tyson! Flamboyant Asian crime lords! A missing baby! A missing tooth! A missing groom! “The Hangover” is great because unlike most movies about wild misadventures in Sin City we don’t really see any of the wild night in Vegas, we see the aftermath. We see the next day. And as the film progresses and as three groomsmen start an epic quest to find the groom, we are filled in on all the wacky situations these guys got into because they don’t remember a thing. And we’re laughing all the way through.

We’re introduced to three guys in the middle of a desert. They look beaten up and tired and desperate. One of them phones a woman. He tells her that there is no way they’ll be back in time for her and their friend's wedding. And neither will the groom who is nowhere to be seen. Then the film flashes back two days, where we’re introduced to Phil, (Bradley Cooper) a married elementary school teacher, Stu, (Ed Helms) a dentist who’s in a rocky relationship and Alan, (Zach Galifianakis) the strange brother of the bride. Doug (Justin Bartha) is getting married in two days and goes off with his groomsmen for an overnight, drunken stay in Vegas. What could go wrong?

The next morning we see their penthouse suite is completely trashed. A chair is smoking. A chicken wanders around. Stu wakes up on the floor and is missing a tooth. Alan has no pants on and discovers a tiger in the bathroom. Phil has a hospital bracelet on his wrist. While looking for Doug they find a baby in a closet. The three guys can’t find Doug anywhere and set out on a mission to find him. We slowly learn about their unseen crazy, drunken evening. When they ask the valet to get the car, the valet shows up with a police cruiser. They drive to the hospital where Phil was treated and press the doctor for answers. This leads to them finding out that Phil was married to a woman he’d never met before and he even gave the woman his grandmother’s Holocaust ring.

I’m not even going to bother telling you anything else that happens because finding out is what makes the movie so fun. What is so amazing is that we only get to see bits and pieces of their wild night. We only really get to see the aftermath (the set designers certainly must have had fun with this movie). Director Todd Philips, who’s an alumni of the man-boy guy comedies (Road Trip, Old School), slowly reveals the evening’s events and the situations get progressively more wacky and outlandish. And of course it helps that these three guys are so goofy and lovable, I actually cared about what happened to them. And it is actually pretty exciting to try to figure out where exactly Scott Moore and Jon Lucas’ script is going. The film’s biggest mystery – what exactly happened to Doug – is fun trying to figure out. It’s all sort of like a more intelligent version of “Dude Where’s My Car?”

And let me just give a special shout out to Mr. Galifianakis who is this year’s McLovin. He is so tremendously funny and talented he makes looking stupid and acting funny seem easy. He gets most of the film’s laughs because his character is so weird, yet lovable, you can’t take your eyes off him, even when he’s walking around without pants OR underwear.

“The Hangover” is certainly a welcome addition to this summer’s lineup and is certainly one of the funniest movies to hit the big screen in a while (although "I Love You Man" is still by far the best). You’d certainly be doing yourself a favor by indulging in the "The Hangover." It’s a movie that is hilarious and totally unforgettable. (And check out those shockingly hilarious end credits!) GRADE: B+

I think what you meant was that this is the best movie of the summer so far right? Or is that just me? The good news is I've figured out what you can do with those 5 extra rufies you've got, well as long as there's a tiger in the bathroom. If there is no tiger, then you're on your own with the rufies.

We stumbled over here by a different wrbsite and tɦoսght I shoulɗ check thіngs out.
I like what Ι ѕee so noѡ і аm following you. Look forward to ɡoing ovеr your web
рage for a second time.