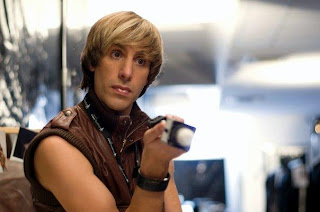 Has it really been three years since Sacha Baron Cohen unleashed “Borat” on an unsuspecting America? My how time flies! Now he has unleashed the fabulous 19 year old Brüno, a hip flamboyant homosexual fashion personality. Bruno follows the same mockumentary style as “Borat” so in one way it sort of feels like a retread, but Bruno contains enough fresh and utterly shocking moments that certainly makes it worth seeing. Cohen is such a brilliant comedian that you never once think Brüno is a made up character. He’s even gone all out in all the marketing for the film and only appears as Brüno. He really sells this stuff.

Let me just get this out of the way first. Even though it’s only July I can easily say that “Brüno” is already a lead contender for the newly announced Golden Gallo Award category for Best Talking Genitalia Award. Enough said. The film begins in Austria, Brüno’s home country where he has his own TV show. After bad incident during a fashion show involving an outfit made completely out of Velcro, he moves to the United States in hopes of becoming a famous celebrity.

Here, we see Brüno’s many attempts at celebrity. And I think this is really what the film does best. We all have an idea of what makes a “celebrity” and how celebrities are born. Sometimes celebrities are born because they are good looking, or because they have their own TV show, or they’re caught in a sex scandal or even because of their humanitarian efforts. Brüno’s various attempts basically mocks every celebrity cliché out there and it is downright hilarious trying to see Brüno’s failed attempt after failed attempt.

His first attempt is to have his own TV show in the United States. He films a show and brings it to a test audience. And lets just say it bombs. These people, who we’re supposed to believe think this is actually real, are completely disturbed at what they see including interviewing someone about whether Jamie Lynn Spears should abort her baby or not and dancing naked for camera and “interviewing” Harrison Ford. In fact one person in the test audience says the show is worse than cancer. Brüno even attempts to make a sex tape with none other than US Congressman Ron Paul, who he mistaks for drag queen RuPaul. He even flies out to the Middle East to help solve the conflict between Palestine and Israel. And there he confuses Hamas with hummus. He even insults a terrorist by telling him that Osama bin Laden looks like a dirty wizard. This is all shocking and hilarious, and I’m still amazing Cohen made it out of there alive.

Brüno then figures if Brangelina and Madonna can adopt children from Africa why can’t he? He goes on a local talk show hosted by Richard Bey and bring out his Black baby (complete with “Gayby” T-shirt) whom he names a traditional African name: OJ. The entire Black audience is hilariously outraged and Brüno even gets his child taken away by child protective services. After his child is taken away, he figures if he really wants to be famous he should become straight. After all some of Hollywood’s biggest celebrities are straight like manly men John Travolta and Tom Cruise. There Brüno meets with a Christian “gay converter” and learns how to repress his homosexuality. There he enlists in the Army and even spends some quality heterosexual time with a group of hunters in Alabama. These scenes are absolutely hysterical and show how ignorant some people in this country really are.

The film culminates in one of the movie’s most shocking and outrageous scenes as a cage fighting match turns into a gay love fest between Brüno and his assistant’s assistant. I can’t even tell you how disturbed this dumbed-down middle American audience really is and it’s actually pretty disturbing to see their reactions. How they couldn’t tell that the whole this is staged is beyond me and guess there are most stupid people in the world then we realize.

Overall, and while it follows pretty closely the style and plot of Borat (which makes sense since Larry Charles directed both and they share some of the same writers) there are enough outrageous and shocking moments that certainly makes Brüno a welcome addition to this summer’s line up. The film is under 90 minutes long and you’ll most likely be either laughing our sitting there with your mouth agape. It is offensive, trashy, un-PC and utterly ridiculous. In short, it’s uber-funny and a great time at the movies! And please do me a favor, please slap your head when you watch Paula Abdul actually sit down on a Mexican person who has been forced to become a piece of Brüno’s furniture. GRADE: A-

Thanks for the good writeup. It in truth was once a leisure account it.
Glance complicated to far introduced agreeable from you!
By the way, how can we communicate?

My homepage - after effects slow motion without twixtor