New York Stories: Woody Allen Finally Returns to the City That Never Sleeps in “Whatever Works” 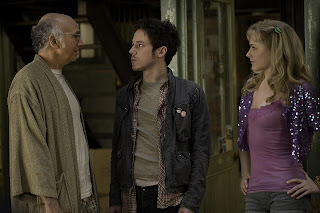 Woody Allen’s last four films have taken place in Europe. He has said the reason he has shot so many of his recent films in England and Spain was a purely fiscal: it was cheaper to shoot in Europe. His clever “Match Point” was even written to take place in the Hamptons, but was able to modify it to London once he realized no American studio wanted to give him money, basically whatever works. So is the philosophy of his new New York City set flick “Whatever Works.” He had no money, so he went to Europe. He mad some pretty decent movies over there and now he’s returned to his old stomping ground for a mildly engaging “feel bad” comedy, that mostly works.

In this new movie Larry David (creator/star of “Curb Your Enthusiasm”) is Boris Yellnikoff, Allen’s latest onscreen alter ego. Yellnikoff is a New York intellectual who has no time for “inchworms” or stupid people like you and me. We know this because he speaks directly to the audience, however, the other characters don’t seem to see us sitting there. He’s miserable and crabby and super ADD – he sings Happy Birthday, out loud, twice while washing his hands. Life sucks so much for him that when he tried to kill himself it didn’t work. He even divorced his wife simply because they were a perfect match.

Enter Melodie. Melodie (played by Evan Rachel Wood) is a young woman from the South. I almost want to say this is the first time such a stranger foreigner has garnered such a large role in one of Allen’s films. She is sort of cliché… she’s dumb and naïve. But what is true, is that’s how New Yorkers view Southerners. But Allen has a point in turning Melodie into a cliché because his characters even have full-on conversations about clichés. So because Boris, god bless his cranky heart, is such a nice guy and his philosophy is whatever works, he takes this homeless girl into his and gives her some food and even lets her crash there. He even shows her the ways of the busy intellectual New Yorker and they form an unlikely friendship and maybe even more…and then Melodie’s mother shows up.

Could another one of Woody Allen’s actresses earn yet another support actress nomination come February? As Melodie’s crazy bible thumping mother Marietta, Patricia Clarkson simply radiates. She shines so bright I needed sunglasses. Ok that was super lame, but I really enjoyed her. And no only is she a funny scene stealer (who tries to hook her daughter up with square-jawed Brit Henry Cavill of “The Tudors” and ends up in a threeway relationship), but it’s fascinating to see her character’s story arch. Say what you want about any one of Allen’s personal life, but what he simply does best is create dynamite roles for women. And for that I simply can’t complain. If you’re a female actress you need to get yourself into a Woody Allen movie stat.

I wouldn’t easily describe “Whatever Works” as an instant classic. It’s a decent enough comedy although I’m not so sure it feels like this is the movie that should have been his big return to New York, but I will take it. He has some really genuinely funny moments, mostly because of a) Boris’ shrill view of life and b) Patricia Clarkson. I am and always will continue to be a huge Woody Allen fan, and for me “Whatever Works” works. So whatever. GRADE: B

Note: I’d be lying if I said I sort of wish (and nothing against David’s great performance) Allen himself had played the role of Boris, but whatever works.

Hmmmm. Interesting review. I'm glad that you sort of liked it. That's promising. I'm going to hopefully check it out soon.