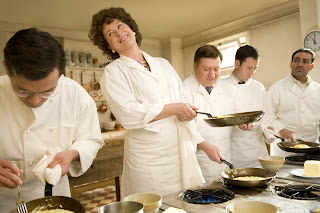 Julie Powell did an amazing thing. She spent 365 days of her life cooking all the recipes (524 to be exact) in Julia Child’s cookbook “Mastering the Art of French Cooking” and wrote a blog about it. What’s so amazing? She never once made French toast or French fries. Julie’s real-life mission is depicted in the latest biopic to hit the big screen, “Julie & Julia” which tells two true stories. That of famed American chef Julia Child who gained prominence as a world class chef while living in France with her husband and went on to write numerous cookbooks and became a spunky TV personality. With her tall frame and her boisterous voice and attitude Julie Child quickly became one of the most recognizable people in America. And she never even had a sex tape.

Julie Powell was an aspiring writer who lived in Queens with her husband and cat. She worked in a cubicle and was unimpressed with her life. She wanted to do something. She loved cooking and writing so it was natural that she’d find a way to merge both her interests. She decided to cook all of Child’s famed recipes from her French cookbook and blog about it and in the movie she’s played wonderfully by Amy Adams. Adams is such a delightful and talented performer it’s no surprise she was selected for the role. You identify with her and you want her to succeed in her “Julie/Julia Project.” Her story takes place in 2002.

The film is crosscut with the story of Julia Child who is played also wonderfully by Meryl Streep. I’m sure Streep has a Golden Globe in the bag for this performance because it’ll definitely be considered one of her trademark performances. I learned so much about Child’s real life and I found most of it fascinating. She’s married to a loyal man named Paul (Stanley Tucci) who supports her always. Like Julie, she was bored with her life and decided to go to school for cooking. As she whipped up lots of delicious recipes she spent nearly a decade trying to get a cookbook published. She dreamed of having a cookbook written with lots of tasty French recipes tailor-made for American women. It was a difficult struggle but we’re with her 100% of the way.

I enjoyed how writer Nora Ephron, who finally getting her grove back since she hasn’t really had a hit film since “You’ve Got Mail,” chose to tell both of these stories simultaneously. She easily finds the commonality between Julie and Julia who have ironically similar names and shared many of the same ups and downs during their lives. Both were unhappy women who wanted to make an improvement in their lives and went for it. They had a dream and achieved it. The movie is a happy one and it’ll most likely make you happy as well.

As well as hungry. Now if you know me at all, I’m a picky eater and I probably wouldn’t have eaten 98% of the foods Julie or Julia made in this film, but that certainly didn’t stop me from smacking my lips every few minutes. This movie is certainly a feast for the eyes and for the soul. It is charming and features terrific performances. The film almost feels a little long and the ending isn’t quite as climatic as I’d have hoped, but the film is worth seeing. If you’re a fan of Meryl or of Amy or of food, and who isn’t, you could do a lot worse than the yummy confection that is “Julie & Julia.” GRADE: B

My brother suggested I might like this blog. He was entirely right.
This put up actually made my day. You can not believe just how a lot time I had spent for this info!
Thanks!