She Loves You Nah Nah Nah: Simply Put “(500) Days of Summer” is This Generation’s ‘Annie Hall’ 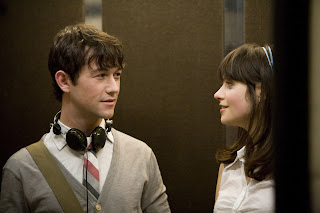 “Annie Hall” is my 9th favorite movie of all time. I easily consider it to be the greatest romantic comedy of all time. It’s a fascinating look at the beginning, middle and end of a romantic relationship. “(500) Days of Summer” could easily sit right along side it on a list of the best romantic comedies. It’s that good. Ok before I start raving, and make you think you’re going to literally see Jesus in person by going to see this movie, let me be frank. This movie may not change your life, but it simply is a pleasing and well made film that is certainly worth your time. It features terrific performances, original direction, a hilarious and heartfelt script and a killer soundtrack. All the sights and sounds are perfect, what more can you ask for in a movie?

Like the narrator states, “(500) Days of Summer” is not a love story it's a story about love. Yes it shows how a young man named Tom (a too-good for words Joseph Gordon-Levitt) falls in love with Summer (a perfect Zooey Deschanel). The problem is what happens when you fall in love with someone who doesn’t even believe in love in the first place? The film jumps back in forth in time, with various numbered title cards indicating how far or early into the relationship Tom and Summer are. We see around the 280 mark that things are not going very well. But we jump forward and see that things are blossoming circa day 40.

Of course we get to see day 1 where Summer is hired as Tom’s boss’s assistant at the greeting card company he works at. He sees her and, who can blame him, is instantly smitten. It’s ok that I used the word smitten because this is the type of movie where people become smitten with each other. Look at the trendy way Tom dresses; he’s a cool, easy going, slightly geeky, laid back type of guy. The one who isn’t afraid to show his emotions and fall head over in heels in love with a girl. While he finds Summer attractive he learns from her own mouth that she doesn’t want a relationship, although it doesn’t stop her from making out with him in the copy room. She doesn’t want the baggage that comes along with spending all of her time with the “love of her life.” Of course Tom is very much the opposite, he wants a woman to love and wants love in return. He even says that loneliness is overrated.

Director Marc Webb takes appropriate cues from Woody Allen by doing all sorts of fun cinematic stuff. He stops the film to show us various points along the way and even gives us a happy and hilarious show stopping musical number once Tom and Summer have consummated their “love.” Cue the marching band and animated blue bird of happiness. What I love so much about the film besides its cinematic trickery (and great use of split screens) is that I simply fell in love with these characters myself. They each have flaws, but like any good romantic comedy you enjoy seeing the main characters’ romantic behaviors. This is the type of couple who sits in the park on a nice warm day and decides to play the Penis Game (oh please like you don't know how to play) or hangs out in Ikea while an Asian family looks at them awkwardly.

I enjoyed all of the quirkiness writers Scott Neustadter and Michael H. Weber have weaved into their smart and highly original script. (Please Academy take note!) The sheer fact that Summer’s favorite Beatle is Ringo Starr instantly makes her unique. I loved the sequence in which Tom, all depressed over Summer, goes to an Ingmar Bergman triple feature in which he imagines himself in the films. Woody Allen would love that! And while the film does a lot of cutting back and forth, you’re never lost because of Webb’s masterful direction (and a big thumbs up to the music supervisor).

I can’t say enough positive things about “(500) Days of Summer.” It’s a movie that’s so enjoyable I just wanted to give it a hug after it was all over. Yes I just said I wanted to hug a movie, if it was at all possible. Or maybe I just wanted to hug Tom and Summer because I wanted to be their best friends, not that there’s anything wrong with my real best friends. I’m just sayin’. Please see this movie; I dare you not to fall in love with it ‘cause it’s one of the year’s best. GRADE: A

Definitely imagine that that you stated. Your
favourite reason seemed to be on the net the simplest thing to
consider of. I say to you, I certainly get annoyed whilst other people think
about concerns that they just do not recognise about.
You managed to hit the nail upon the top and also
defined out the entire thing without having side effect
, folks can take a signal. Will probably be back to get more.