In the Loop: “Happy Death Day” is a Perfectly Winking, Goofy Twist on the Slasher Flick 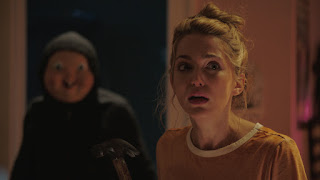 Let’s hear it for Blumhouse huh? The production company really know what they’re doing when it comes to horror. Hot off the heels of “Get Out” from earlier this year is “Happy Death Day” which is basically “Mean Girls” meets “Scream” filtered through “Groundhog Day.” First of all it’s not exactly a rip off of “Groundhog Day” since a character even mentions the film at one point. The film uses that repeating day premise to basically tell a “Christmas Carol” type story about an unlikable person who becomes likable over the course of a ridiculous, fantastical situation. Except this time it isn’t a miserly old man, it’s a bitchy sorority girl who learns a lesson after repeating the last day of her life over and over again. “Happy Death Day” is a fantastic ode to the slasher subgenre with plenty of winking nods, a delightful cast, and a premise that never takes itself too seriously. It knows exactly what kind of film it is and just has fun. The film isn't the scariest horror flick to be sure, but it makes up for it with pure wit and charm.

Breakout star Jessica Rothe stars as sorority girl Tree Gelbman and she’s quickly obnoxious. She wakes up, disgusted that she’s in a dorm room and unable to remember the night before. She meets Carter (Israel Broussard) who took her home with him and she storms out of the room and back to the sorority house to start her day. It turns out it’s Tree’s birthday and she doesn’t seem very excited about it. Her dad keeps calling and she won’t answer the phone. We learn she’s sleeping with one of her married professors and is a generally unpleasant person. Then she gets murdered. Oh but then she immediately wakes up back in Carter’s dorm room and it’s the same day she just experienced. She got stuck in one of those pesky time loops you see in movies like “Groundhog Day” and “Edge of Tomorrow.” “Groundhog Day” tackled the comedic elements of that story and “Tomorrow” tackled the sci-fi action element. “Happy Death Day” applies it to the horror genre. And rather well I might ad.

Director Christopher Landon who wrote a bunch of the “Paranormal Activity” films and “Disturbia” really gets to the meat of the matter by giving us one of horror’s most interesting character arcs in quite some time. Horror films are usually too occupied with blood and guts to care much about the characters but here Tree is a full-fledged human being. She’s despicable at all the right parts but as she begins to live the same day over and over you get a sense of what’s been making her such a miserable person. And Rothe really brings her to life. By the film's end I wanted to hang out with her. Landon takes Scott Lobell’s witty script and just runs with it. Making some parts appropriately suspenseful and creepy (the baby mascot mask is equally eerie and silly) and making things funny at just the right moments. The film functions as a horror film should with plenty of things to make you jump balanced with plenty of tension-busting laughs. But it's not really all that frightening. But that's ok. There are enough bitchy catfights to make up for the lack of true scares.

It’s amazing how quickly you buy into the ridiculous premise in “Happy Death Day” (that’s thankfully never explained) and you find yourself rooting for something you started out hating. But that’s the point of course. Tree learns to be a better person by experiencing her own death over and over and over again. And for a film in which we’re forced to watch the same day over and over it’s surprisingly fresh and interesting each time and offers plenty of fun surprises along the way. This is highly recommended for genre fans who are willing to sit through something a little quirky, and purposely over-the-top in a fun, borderline campy way.  GRADE: A-

You will take pleasure in the film so much more, the less you know more about the plot.watch Sri Lanka Movies online